For weeks now, conversations about the rise of the ride-hailing apps, specifically Lyft and Uber, have dominated the news and social-media conversations in St. Louis.

But few seem to remember St. Louis' original ride app, Carmel, which went live in March with none of the fanfare or drama of its competitors.

Sick of being ignored in the media scrum after Lyft's launch, Carmel is fighting back with a simple message to Lyft: Follow the rules because bullying gets you nowhere.

"We don't understand what they're whining about," says Carmel's CEO Avik Kabessa of his app-based competition. "They should stop crying and start complying. Carmel has been able to operate legally in St. Louis and work within the system without the benefit of millions of venture-capital dollars, so there is no reason these heavily funded, unlicensed apps cannot do the same."

Lyft is just trying to confuse riders, Kabessa says, by pretending there's no way to fit Lyft's peer-to-peer, ride-sharing, collaborative economic model into a legal license. Carmel's product may be a little different -- it charges fares instead of Lyft's "donations" and doesn't verify drivers' and passengers' identities using Facebook, for example. But thousands of people have already downloaded and used Carmel's app to get a ride around the city, the company says. 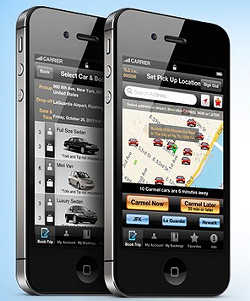 "Our industry-leading, 30-year track record of compliance and our willingness to play by the rules is why the MTC granted Carmel a license to bring our app-based car service to the riding public of St. Louis city and county," Kabessa says.

That's not to say Carmel's relationship with the Metropolitan Taxicab Commission, which regulates car-for-hire services in St. Louis city and county, hasn't hit some roadblocks of its own.

Per the taxi commission's rules, a Carmel car can't pick up a passenger who orders a car for a pickup time less than an hour away. They call it the "minimum time" rule, designed to give taxis first pick at ready-to-go traffic and reserve planned trips for black-car services.

But the minimum-time rule makes business harder for app-based businesses like Carmel, which wants to be available to any passenger at the press of a finger. In March alone, the company lost more than 11,800 calls because of the "minimum time" rule.

"But from Carmel's perspective, the solution is to work with the taxi commission to improve the rule -- not to first break the rule and then look to amend it, a frequent tactic used by some unlicensed apps," Kabessa says. "Carmel is confident the taxi commission will react correctly with regards to the 'minimum time' issue in due time and sees no reason to ever bully them into it."