Red-Light-Camera Ban in St. Charles County May Be Up to Voters 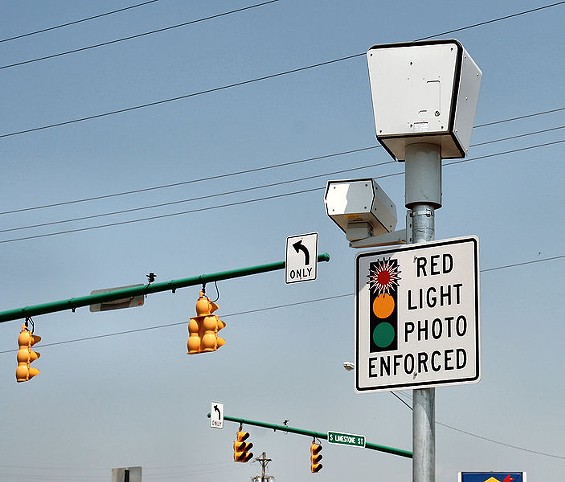 If a vote in the St. Charles County Council chambers goes the way it's expected to tonight, residents will get to decide for themselves whether to ban red-light cameras in the county.

While only one St. Charles County city, St. Peters, uses the controversial cameras, Councilman Joe Brazil is proposing to change the county charter and ban red-light cameras, if voters approve.

"It is a proven fact that these cameras cause traffic accidents and injuries from rear-end collisions," Brazil says. "I don't think these cameras are beneficial to the residents of St. Charles County."

Brazil likely has enough votes on the county commission to pass his amendment, which means St. Charles County voters could decide to outlaw cameras on the August 5 ballot.

Rules surrounding red-light cameras in Missouri have become confusing and contradictory in the last couple of years. A judge recently outlawed the cameras in St. Louis city, then changed his mind and allowed the program as long as fines were kept in an escrow account. Late last year, the Missouri Court of Appeals ruled that Arnold's red-light-camera ordinance is unconstitutional.

In St. Charles County, a judge dismissed a St. Peters woman's red-light-camera ticket because convictions based on red-light cameras don't result in penalty points added to a driver's license, which is a violation of state law. The judge stopped short of voiding the city's red-light-camera ordinance entirely.

The final ruling on red-light cameras in Missouri will likely come from the state's Supreme Court, but not anytime soon. The court denied hearing cases from Creve Coeur, Kansas City and Florissant -- where appellate courts ruled the cameras were invalid -- in February.

Under recent decisions by Missouri's appellate courts, ordinances authorizing red light cameras are unlawful because they conflict with state law or because they do or may unconstitutionally presume that vehicle owners are operating their vehicles at the time of a violation...In recent cases now on appeal, circuit courts in the City of St. Louis and in St. Charles County have also ruled that red light cameras are unconstitutional.