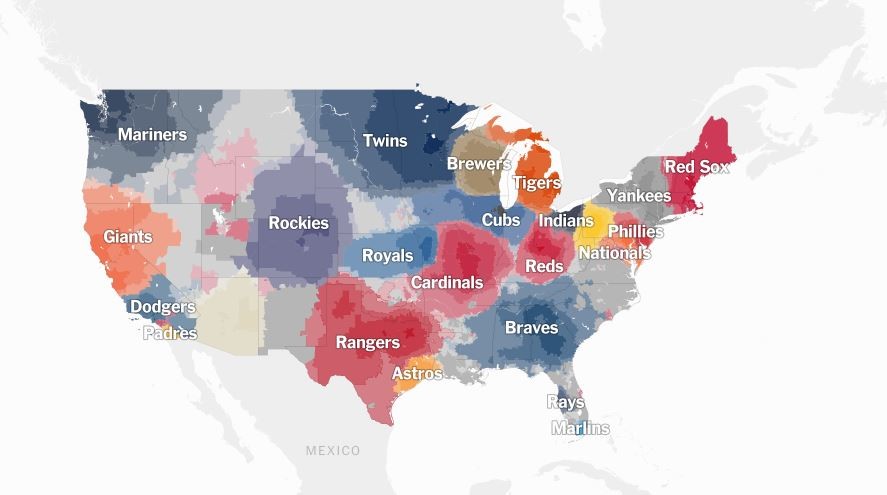 The New York Times new data journalism blog, the Upshot, is off to a hell of a start, especially if you're a fan of baseball and/or zooming in and out of interactive maps.

Built on Facebook data, the map reflects areas' individual allegiances down to the ZIP code. Unsurprisingly, the Cardinals hold a vast swath of the Midwest in its thrall. (Which is a good thing, because evidence suggests Cards fans are the best damn fans in all of baseball.)

The map's best feature, however, is that it brings baseball's territorial rivalries out of the realm of barroom debate and into number-crunched reality. Indeed, the spreading colors hearkens us back to our days playing Risk, but instead of little plastic cannons rolling toward Kamchatka, it's the Kansas City Royals spreading its blue influence into Missouri.

The Times dubbed the dividing line between the Cards and Royals "The Denkinger Line," named for the umpire who called the Royals' Jorge Orta safe at first in the bottom of the 9th in Game 6 of the 1985 World Series, considered one of the most egregious missed calls in baseball history,

Let's revisit that bit of infamy.

Orta, the runner Denkinger called safe, didn't actually score himself, but Royals players still credited the flubbed call for helping them win the series. As a border name, "The Denkinger Line" is actually kind of perfect: The best rivalries are built on shared history and perceived/irrational grievances.

That being said, we need a more evocative name for our rivalry with the poor Cubs to the north. The Times's suggestion, "The Downstate Line," while geographically descriptive, lacks the shoulder-chipping, military-style gravitas evident in "The Denkinger Line." Despite the Cubs century-long World Series drought, we can't forget the 1998 race between Mark McGwire and Sammy Sosa for the home-run record, or the fact that the two clubs have played each other more than 2,000 times.

Help us out, Daily RFT readers: What should the rivalry border between the Cards and Cubs be called?