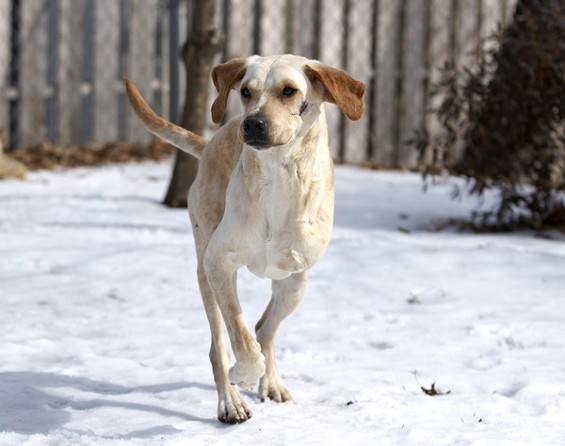 Four years after being rescued from a dog hoarder in mid-Missouri, Marshall the dog already has his own book, therapy tour and mission statement. Now, he's getting a movie based on a heart-wrenching story of friendship and forgiveness.

But every movie needs some extras, and that's where you come in, Daily RFT readers.

Marshall the Miracle Dog is casting for extras and supporting cast members at 9 a.m. Sunday, April 27, at Clayton High School. Filming starts in June, and the movie comes out in late 2014.

"We are thrilled to be able to cast this film in St. Louis, the place that Marshall calls home," says Carrie Houk, the movie's casting director. "There's such an outstanding pool of talent here."

See also: Casting Call: Are You Cool Enough To Be on St. Louis' Crappy Version of The Hills?

In the story of Marshall the Miracle Dog, Finn, a twelve-year-old boy bullied at his new school, rescues Marshall, a spirited dog held in deplorable conditions by a hoarder.

The movie is based on real events. In 2010, the real-life Marshall was rescued from a hoarder in the town of Marshall. The woman had so many dogs that her children asked Animal Planet to tell her story on Confessions: Animal Hoarding.

Visit NBCNews.com for breaking news, world news, and news about the economy

Carolyn Root spent up to $20,000 a year caring for more than 80 dogs in a filthy lot in mid-Missouri. Root would steal dogs from front yards and eventually told her children she'd rather abandon one of them than give up a dog.

By the time Marshall was rescued, he was covered in bite marks and had a broken front leg. A hole the size of a tennis ball opened in the side of his face. Animal-rescue experts said Marshall had been attacked by some of the 80 other dogs on the property, probably over a scarcity of food.

Marshall lost his front leg, but in time, Dr. Stephen Schwartz, a veterinarian at the Humane Society of Missouri, announced the pup was healthy enough to be adopted. Schwartz posed with Marshall for a video. When Cyndi Willenbrock saw the video on YouTube, she knew she wanted to bring Marshall home with her:

Willenbrock wrote a book based on Marshall's life, and now producers are turning the book into a movie.

Want to audition to be an extra? Bring an official state ID to Clayton High School at 9 a.m. on Sunday, April 27. Aspiring performers can also bring a headshot or recent snapshot.

Performers of all ages, races and ethnicities are welcome. There is no charge to audition or to park.