Shuttered since 1959, the once bustling Cotton Belt Freight Depot is a 750-foot-long concrete ruin of graffiti, rot and trash. The structure is virtually invisible to city dwellers, hidden as it is behind a row of factories on the north riverfront.

But with the opening of the nearby Stan Musial Veterans Bridge in February, the pocked face of the Cotton Belt now greets motorists crossing the bridge from Illinois. Tom Nagel, an artist and preservation activist, wants to give those drivers a real St. Louis welcome: A 750-foot-long mural across the east facade.

"You drive across that bridge, but there's nothing there but this huge abandoned building," says Nagel. "Let's put something amazing there."

The Cotton Belt has a special place in Nagel's heart: During high school, he and his buddies used the sprawling husk as a sanctuary where they could smoke cigarettes, drink occasional beers and watch the Fourth of July fireworks.

Later, groups of homeless people used the depot's adjacent field as a tent city -- until bulldozers drove them away. The area is still an "urban playground," as Nagel calls it, one that still attracts vagrants and drug addicts but also urban explorers, cyclists from the nearby Riverfront Trail, the Artica arts festival and even a few wedding parties.

Not long after graduating from Mizzou in 2011, Nagel approached the building's owner, Mark Schulte, about covering an entire side of the building in a massive mural. The plan, he says, was to finish the work by the time the new bridge opened.

Though he missed that deadline, Nagel's mural proposal caught the public's attention through the civic crowd-funding platform Rally St. Louis, which added two $10,000 donations from the Regional Chamber and Growth Association and the Convention and Visitors Commission.

But even with over $20,000 in his project's coffers, Nagel says the mural can't be painted without an 80-foot boom.

"Any company who wants to sponsor a boom, they'll get their logo on the side of the building," promises Nagel, who also works as communications coordinator for the City Arch River 2015 Foundation. "Once we have the boom, we have a local artist picked out that I can't announce yet. Then we'll have enough resources to do this massive and incredible piece of art."

Update: We should have noted that Jasmin Aber, executive director of Creative Exchange Lab, played an instrumental role in creating the Cotton Belt proposal submitted to Rally St. Louis in 2012. Nagel was actually an intern at CEL at the time, and the proposal credits both Aber and Nagel as the project's team leaders.

Continue for photos of our exploration of the "urban playground" within the Cotton Belt Freight Depot.

Once a loading dock for cargo traveling the Cotton Belt rail line that linked Arkansas and Texas, the ground floor today is marked by exploded paintballs, layers of graffiti and broken glass. 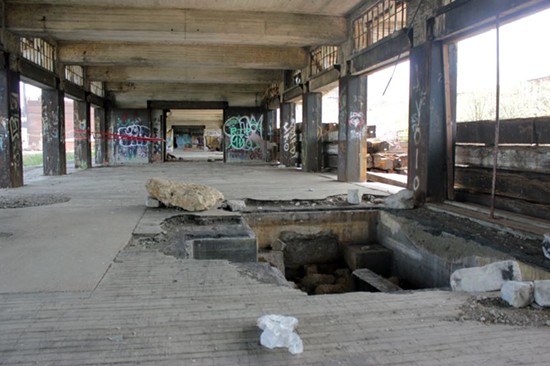 Continue for photos of the Cotton Belt's second floor. 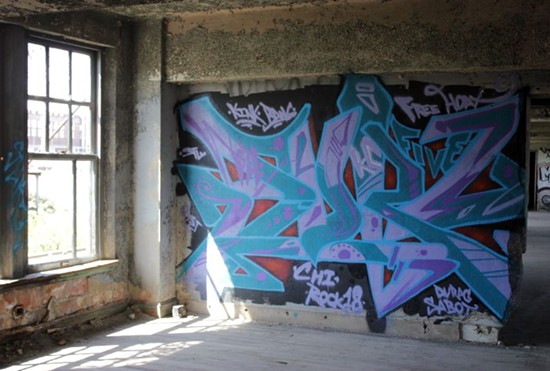 On to the third floor...

We ran into a local rap group on the roof, Souls of Liberty. They were taking advantage of the setting to shoot a new music video, and two of the band members were nice enough to let us photograph them. 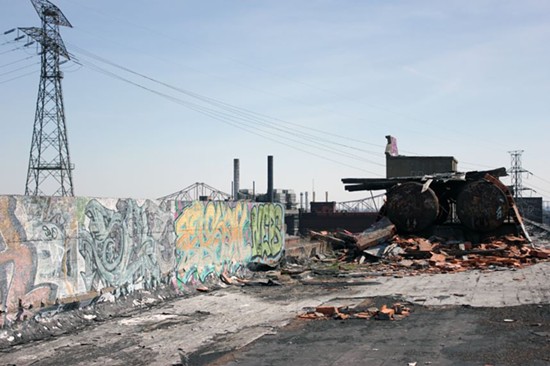 Photos Postcards from the Edge