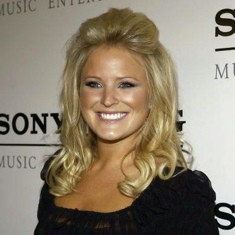 In a civil lawsuit Laurie filed after submitting divorce papers, the blonde billionaire claims her husband and his buddy funneled hundreds of thousands of dollars out of a business Dubbert convinced Laurie to let him run, according to TMZ.

Dubbert and his friend hired themselves as general contractors at a retail center in Malibu, California, and increased their monthly salaries from $15,000 to $70,000, TMZ reports. Dubbert also paid himself $250,000 a year to manage the project, Paige claims.

Laurie says she's ditching her married name, giving Mizzou fans around the world a chuckle. Laurie's had some trouble making her name stick in the past. Ten years ago, the University of Missouri stripped her name from the school's sports arena when her college roommate admitted to doing Laurie's homework for her.

Laurie voluntarily returned her University of Southern California degree. (Yep, that's right, MU named a stadium after her, and she didn't even go to school there. That's what you get when your parents have $25 million to spare.)

Laurie's mother, Nancy, is the daughter of the late James "Bud" Walton, who founded Walmart in 1962 with his brother Sam Walton.