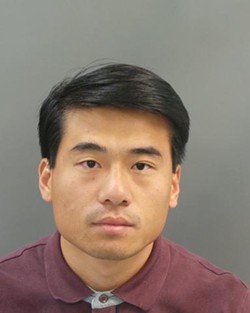 Jiang, 31, faces two counts of first-degree statutory sodomy for having sexual conduct with a boy younger than fourteen at the St. Louis Cathedral School, in the 4400 block of Maryland Avenue. The boy told investigators Jiang abused him twice in a school bathroom between July 2011 and August 2012, according to court documents.

Jiang voluntarily surrendered to police Thursday, and the Archdiocese of St. Louis revoked his canonical privileges while he faces the charges.

The boy's family reported the abuse through the Missouri Child Abuse and Neglect Hotline, according to the archdiocese. The family has claimed for the past year that their child was bullied by other students but only raised sexual abuse allegations against Jiang this week.

In November a judge dropped child-endangerment and witness-tampering charges against Jiang after the court decided the priest had never been alone with the victim, who claims Jiang sexually assaulted her when she was fifteen.

Before those charges were dropped, the victim's family sued the archdiocese and Archbishop Robert Carlson for allowing a sexual predator to serve as a priest and have unsupervised contact with their daughter.

See also: Lawsuit: Priest Asked Teen to Dress Like a Woman, Not a Child, Before Sexual Abuse

The lawsuit claims Jiang used Scripture to manipulate his victim into submitting to sexual assault on several occasions, including in a rectory parking lot, and tried to leave the victim's family $20,000 in hush money.