Lyft was only live in St. Louis for about an hour and a half before police pulled over and cited a driver for operating an illegal taxi service.

The driver, a Nashville native who said he'd come up to St. Louis for Lyft's debut, was issued two summonses and a temporary restraining order Friday night after St. Louis Metropolitan Police pulled him over in front of City Hall. When told that Lyft is unlicensed in St. Louis, the driver said he and his four passengers "weren't doing anything wrong."

Lyft spokeswoman Paige Thelen tells Daily RFT the company promises to cover all court and attorney's fees for drivers busted by law enforcement because trying to license the company is like "trying to fit a square peg in a round hole."

But the pink mustaches were nowhere to be found after 8:30 p.m. No other drivers received summonses Friday. 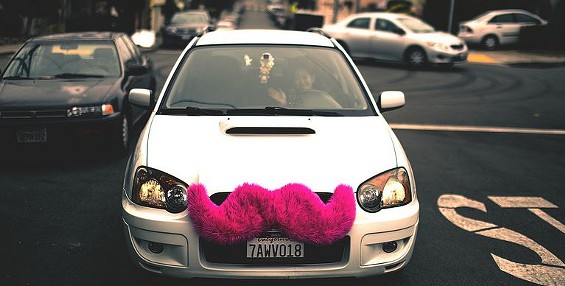 "There's not much you can do with two police cars and two agents," Olandi tells Daily RFT. "This is only the beginning. We'll adjust to them; they'll adjust to us. We just have to take it night by night."

On a typical shift, MTC agents turn their trained eyes to typical illegal cabbies, mostly drivers registered in Illinois trying to pick up fares in Missouri or drivers working even after their MTC privileges were revoked. They also check on legal taxis, making sure drivers have the proper license and uniform, a white shirt and black pants.

Lyft's launch changed that. Now, police and MTC agents look for the emblematic pink mustache that marks Lyft cars, pulling over any with one or more passengers.

MTC agents and city police will patrol for Lyft drivers Saturday night, but after this weekend, it'll just be the MTC looking to cite drivers in cars with fuzzy pink mustaches.

See why MTC Deputy Director Bob Oldani says he's concerned about clashes between cabbies and Lyft drivers on the next page.

Olandi says he's concerned about violence breaking out between Lyft drivers and full-time taxi drivers who think Lyft is encroaching on their turf. The MTC already heard a report of cabbies threatening a car with a pink mustache in front of a downtown hotel, but investigators couldn't find any evidence.

Full-time taxi drivers are a diverse group, but many, Olandi says, are recent immigrants who turn to driving full-time when their educational or professional qualifications don't translate to the U.S. workplace.

"These guys are trying to support families," he says.

But Lyft drivers are a totally different crowd, famous for driving part-time for beer money or to help pay off student loans. When Olandi briefed police on Friday's assignment, he described Lyft drivers as college-educated people who work during the day and drive mom and dad's car on the side.

"We're trying to get this person to do business the way everybody else does business," Olandi told police before Friday night's shift.

When Lyft drivers get pulled over, MTC agents give them a list of St. Louis taxi companies they can work for legally.

Their passengers, however, get kicked to the curb. After a Lyft driver is cited, his or her passengers have to find a new ride, Olandi says.

A co that helps prevent drunk driving (@lyft) is being squashed by the Taxi Commission & @Hamiltonstl. Are we for or against drunk driving?

Almost impossible to believe St. Louis police resources are behind used to stop @lyft drivers on a Friday night. But that's whats happening.