Lyft, the San Francisco-based ride-sharing app, launches here today, even though the company never got a license to operate in St. Louis City and County, something Pryor didn't know until he read a story in the Riverfront Times.

Lyft's recruiters never mentioned -- to Pryor or to any other driver, he says -- that Lyft's launch is technically illegal until the company is certified. The St. Louis Metropolitan Taxicab Commission has already sent Lyft a cease-and-desist order.

"We've notified them that we consider that an illegal cab operation," Ron Klein, executive director of the MTC, tells the St. Louis Post-Dispatch. Klein adds the commission will take "enforcement steps" to stop Lyft from operating without a license.

Once he heard that, Pryor says, he was ready to turn in his fuzzy pink mustache, the emblematic quirk that separates a Lyft car from a regular car.

"They should have told me about the licensing stuff," Pryor says. "I can see how taxi drivers can be mad if you're taking their business away."

Update, 11:30 a.m. - Paige Thelen, Lyft's spokeswoman, says the company is addressing the issue with drivers Friday night before the launch.

"We always stand behind our drivers as we work through challenges at the state and city levels," Thelen tells Daily RFT. "In the case that a driver is pulled over or cited, we will provide support immediately and cover the costs of any citations and necessary legal assistance. We will be communicating this to drivers before the launch tonight to ensure that they feel comfortable. They can't wait to hit the road." End of update.

Only one app-based car service, Carmel, is licensed to give rides. 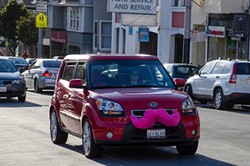 The taxi commission developed a special license for ride-sharing apps, and St. Louis rules say any companies that operate or dispatch vehicles for hire must be certified.

"If [Lyft] does not comply with the taxicab commission, they will be operating illegally and would be in violation of the law," MTC spokesman Richard Callow tells the St. Louis Business Journal.

Lyft is hoping St. Louis will turn a blind eye, especially because their business model subverts traditional taxi fares. As Lyft's spokeswoman Paige Thelen puts it, "applying for that license would be like trying to fit a square peg in a round hole."

Lyft doesn't technically charge a fare for rides. The app suggests a donation, which riders can increase or decrease. Any money paid on top of the suggested donation is treated like a tip and given directly to the driver.

"We've seen the community already express excitement and enthusiasm," Thelen says. "We believe the city would not want to take that away from its residents."

St. Louis isn't alone in trying to figure out how Lyft fits in its transportation scene.

The fight over Lyft is heating up in Minneapolis, Minnesota, and Madison, Wisconsin, where city officials are trying to regulate ride-sharing apps according to the same standards set for taxis. Madison mayor Paul Soglin says Lyft is trying to "muscle their way into the Madison market" instead of respecting city laws in the Milwaukee Journal-Sentinel.

Companies like Lyft are banned in Miami, New Orleans, Houston, Austin and Portland. To fight back, Lyft recently hired two boutique Washington lobbying firms to pave the way for Lyft nationwide, according to the Huffington Post.