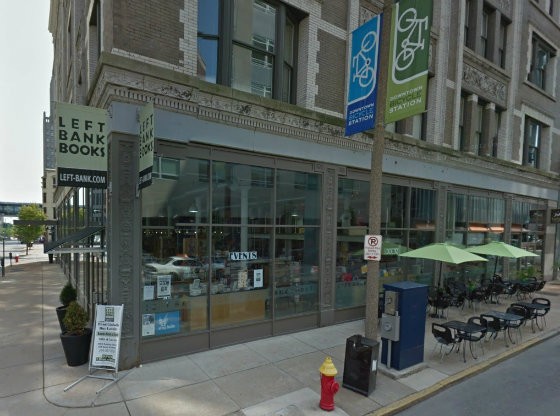 The lovely downtown location of Left Bank Books is closing.

In an e-mail message to its listserve this morning, owner Kris Kleindienst confirms that while they are departing downtown, the flagship location in the Central West End will soldier on. She adds there are no current plans for layoffs.

The last day open will be May 31st. We've left a message with Kleindienst and will update when we hear back. Click through for her message to customers in its entirety.

Update: Daily RFT just spoke with Kleindienst, who did her best to console us.

"It's OK. It's going to be OK," she said. "It's kind of a relief actually to be a decision we're acting on, as opposed to something we're agonizing through."

Kleindienst says that negotiations have been going on with their landlord for six months now and finally, a decision had to be made. She says her staff had about a month to prepare for today's announcement.

"This store showed growth the entire 5 years we've been here, but it wasn't growing fast enough to meet the cost," she says. "When you're talking about a renewed contract you're usually not talking about things getting less expensive. Everything was getting getting more expensive. We didn't feel it was unreasonable but it wasn't [sustainable.]"

While one doesn't typically go from slugging beers and ogling girls in ass-less chaps to thumbing through the latest David Sedaris, we couldn't help but bring it up Ballpark Village as the big headline in downtown revitalization. Could more crossover time have helped? Kleindienst recalls an interview about BPV she just gave to St. Louis Magazine:

"I think the phrase was 'thumbtacks on a map.' There isn't enough yet between the individual attractions downtown to make it a really great walking downtown," she says. "We're not giving up on downtown we just can't subsidize it, that's all."

While her e-mail announcement to customers mentioned a potential new downtown location, she says she's no where near that. First logistics have to to be worked out on moving things to the Central West End location, then there's the 45th anniversary party for Left Bank to look forward to in July. Not to mention author events that are still in the works (Kleindienst name dropped Garrison Keillor, Laurell Kaye Hamilton, Colson Whitehead, Elizabeth Gilbert...keep an eye on their events page.)

"People should continue to watch for news from us," she says.

Even though we've loved being part of the revival of Downtown St. Louis, we have decided to close the downtown location in the next month. We were in negotiations for several months with our landlord, but ultimately could not reach an agreement. We remain open in our flagship location in the Central West End 7 days a week, and until 10pm on 6 of those days.

We depart our downtown location with respect for our landlord and his vision. He is a great advocate for a livable downtown, and while we will no longer be in this space, we wish him the best.

And here's that e-mail blast:

Left Bank Books the 45-year old independent St. Louis bookstore, announces that it is closing its downtown location by May 31, 2013. Its flagship store in the Central West End at 399 N. Euclid remains open and continues to operate its robust schedule of author events and school services. Its corporate sales program also remains unchanged.

"We loved being part of the revival of downtown St. Louis. There is a lot happening downtown that is promising and it will continue to grow," says Kris Kleindienst, who co-owns Left Bank Books with her husband, Jarek Steele. "We were in negotiations for several months with our landlord, but ultimately could not reach an agreement."

Kleindienst and Steele will continue to evolve Left Bank Books' operating model to meet the changing needs of the community it serves. A few of the plans under consideration include: expanding the CWE location, opening a second store either downtown or in another St. Louis neighborhood, and adding a coffee or a wine and beer bar to the Central West End location.

"We depart our downtown location with respect for our landlord and his vision," says Kleindienst. "He is a great advocate for a livable downtown, and while we will no longer be in this space, we wish him the best."

Left Bank Books employs 21 people, both full and part-time, including the owners Steele and Kleindienst. There are no current plans to make significant reductions in staff levels. "Our walk- in traffic, online store, growing author event programming, institutional, and school services require a dedicated staff in the backroom as well as on the floor," says Kleindienst.

Left Bank Books has a membership-based loyalty program and also operates the Left Bank Books Foundation, a 501c3 corporation. The Foundation's primary program is River City Readers, a project to bring books and authors to St. Louis Public School students. "River City Readers is one of the programs that we are proudest of," says Kleindienst. "We are excited to be able to involve our customers to make real changes in the lives of St. Louis kids." Left Bank Books also hosts several in-store fundraisers for area schools and non-profits.

Left Bank Books was founded in 1969 and collectively run in the Delmar Loop neighborhood by a group of Washington University graduate students. Kleindienst was hired as a bookseller in 1974. In 1977, the store moved to its current location in the Central West End and Kleindienst, along with Barry Leibman took ownership. Steele, who has worked at Left Bank Books since 2002, assumed co-ownership in 2006. Leibman retired in 2010.

Unsurprisingly, the lamentation has already begun:

We're going to miss having @LeftBankBooks as our neighbors DT & wish them all the best in their future endeavors. #STLpride

@LeftBankBooks NOOOOOOOOOOO!!! I need this place of solace in my downtown work life!

And then there's this...

BTW, if @LeftBankBooks wants a new space, I do have a storefront on Washington.