The Spivey Building: East St. Louis' First and Only Skyscraper 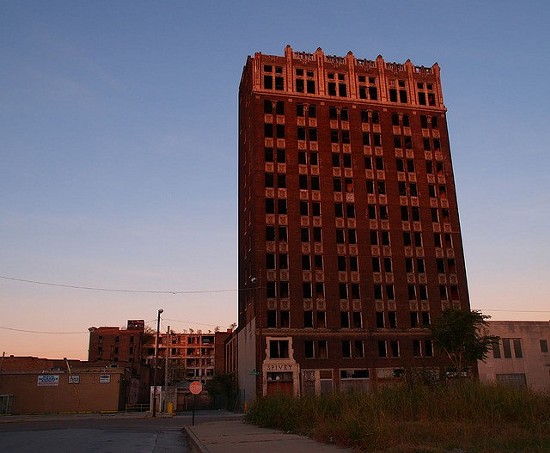 East St. Louis, Illinois, doesn't appear in many architectural guidebooks, but it should. Located just across the river from downtown St. Louis, the city boasts some of the most interesting architecture in the whole region. While much of the city's building stock has fallen victim to neglect and demolition, parts of East St. Louis' downtown remains intact, awaiting the day when prosperity returns to the city and the abandoned buildings find new use. Hopefully that day will come before the wrecking ball does.

Originally known as Illinoistown, the history of East St. Louis stretches back to Native American settlements near Cahokia Mounds. It wasn't until after the Civil War, however, that the city really took off as St. Louis' industrial titans began to relocate factories to the east side of the Mississippi River. East St. Louis' leadership proved more lax and accommodating than those west of the river, allowing robber barons to found independent towns such as National City, Alorton and Monsanto (modern-day Sauget) to avoid paying taxes. For a century the deal worked, as East St. Louis benefited from the income its citizens earned at the neighboring stockyards and industries. 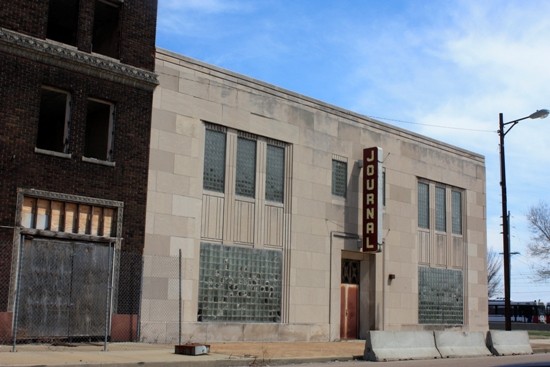 As East St. Louis' population rose to 80,000 people in the twentieth century, beautiful buildings sprang up on Collinsville Avenue and the adjacent streets of downtown. On Missouri Avenue, A.T. Spivey purchased the East St. Louis Journal in 1915; in the coming decades, he would reap huge profits from the newspaper. But in boisterous (and often violent) East St. Louis, bravado ruled in the tough arenas of politics and business. Spivey soon realized his dream to reshape the city's skyline needed a grand gesture, one that would permanently put his name on the streetscape of East St. Louis.

The perfect solution? Spivey would build East St. Louis' first and only skyscraper next to the offices of the Journal. In 1925 he purchased the lot next door to his newspaper offices. Were property values in downtown East St. Louis really so exorbitant that a skyscraper made good financial sense? Not really, but Spivey nonetheless turned to Albert B. Frankel, a local architect, to design his new edifice. William Wimmer, a local builder, would become the general contractor. The name of the new vanity building? The Spivey Building, of course. 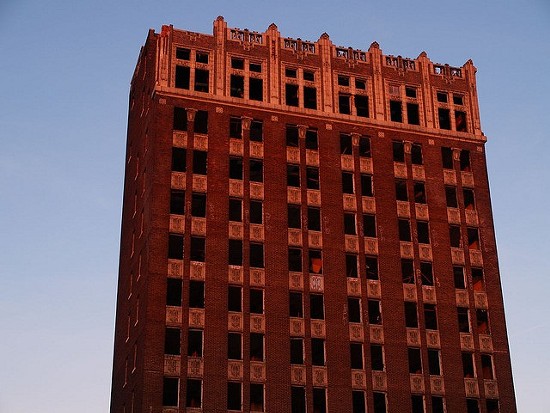 The Chicago School of architecture, the progeny of Louis Sullivan, provided Frankl with the artistic inspiration for the Spivey Building. Sullivan, as Frankl demonstrates in the Spivey Building, sought to create a new language in architecture, emphasizing the height of new steel-skeleton skyscrapers. Strong vertical lines and elaborate but original decoration drew the eye upward to the highly decorated roofline of the building. Wimmer completed the building for his patron in 1927, just a couple of years before the stock market crash of 1929.

The first floor hosted high-end shops in a prototypical shopping mall, while the second floor housed offices of the Illinois Light and Power Company. The ten stories above that held prominent tenants such as doctors and lawyers. Marble walls, large glass display windows and elevator attendants gave the building an aura of luxury. 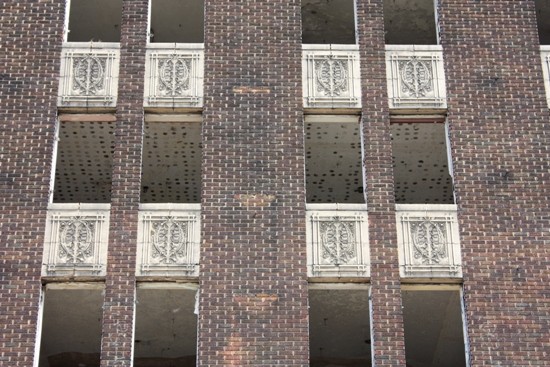 Sadly, he fortunes of the Spivey Building fell along with those of East St. Louis. The Journal closed, downtown began to decline, industrial powerhouses shuttered and the city's population plummeted. The history of the Spivey in the last several decades is convoluted. Targeted for redevelopment, the building was gutted, leaving it exposed to the elements. But then news reports revealed that the developer, Philip H. Cohn, had improperly disposed of asbestos removed from the building. (He eventually went to prison for a bunch of other crimes.) The building now sits idle -- too expensive to demolish, too expensive to renovate. And until East St. Louis rebounds (if it ever does) there will be the Spivey, a reminder of what could have been for a once proud city.