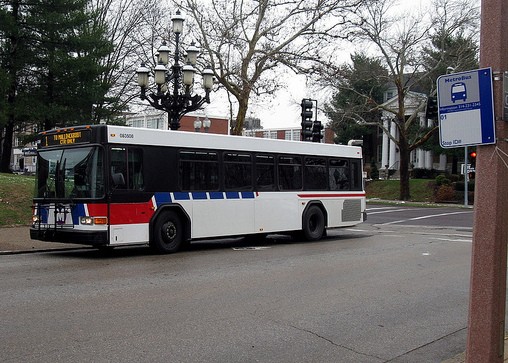 A seventeen-year-old boy was stepping onto a Metro bus in north St. Louis Monday when another teen fired several rounds and struck him in the shoulder, according to St. Louis Metropolitan Police.

The bus driver, who was in the driver's seat, and the fifteen passengers on the bus were not injured.

Just before 1:30 p.m. Monday, the victim was waiting for his bus inside a gas station in the 1400 block of North Kingshighway when he spotted a seventeen-year-old boy he knew, police said. As the victim stepped onto the bus, he heard several gunshots and realized a bullet grazed his shoulder.

Police say they have identified the victim's seventeen-year-old acquaintance as a wanted suspect. They are investigating the shooting.

Two drug dealers robbed their 23-year-old customers and shot one in the arm at 12:30 a.m. Tuesday morning in the 5900 block of Bartmer. Police are searching for the suspects, a 25-year-old man and one unknown man described as black, 6'0", thin build with a scar on his nose, wearing a black and blue hooded sweatshirt.

The shooting victim is listed in stable condition.

Here are the full reports from police:

The victim was waiting for a Metro bus inside of a gas station at the above location when he observed the suspect, who is an acquaintance. As the victim stepped inside the bus, he heard several gunshots and realized he had been grazed by a bullet in his shoulder. The bus driver was seated in the driver's seat of the bus and was not injured. There were 15 additional passengers on the bus and none were injured. The victim was conveyed to a hospital and listed as stable. The suspect was identified and placed "wanted". The investigation is ongoing.

The victims were in the suspect's vehicle attempting to purchase drugs when the suspects stated they had vehicle problems and pulled over in the above location. The suspects then revealed firearms and announced a robbery. Both victims complied then attempted to flee the scene. As they were running, Victim #2 was struck by gunfire. He was conveyed to an area hospital to be treated for gunshot wounds to the arm and was listed as stable. The suspects remain at large. Investigation revealed the suspects' vehicle, which was left at the scene, was reported stolen. The investigation is ongoing.