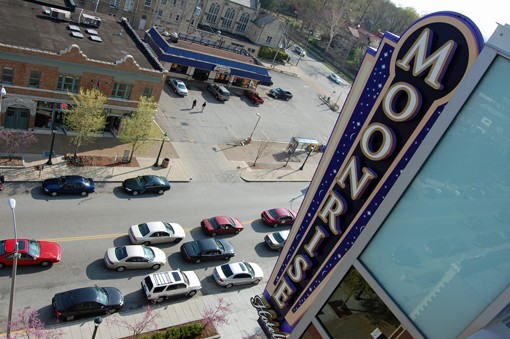 Braland Norman was technically the victim in a drive-by shooting late last year in the Delmar Loop, but he now faces felony charges for packing his own heat and stealing a car to get escape.

Norman and a friend were stopped at a red light at Skinker and Delmar boulevards at 7 p.m. December 29 when a blue SUV pulled up and an unknown suspect began shooting rounds into Norman's car.

Norman, 28, was shot in the back, according to the United States Attorney's Office. The driver, Allie Harper, was shot numerous times. The shooter and blue SUV fled the scene, but Harper raced the car forward into the intersection, crashing into westbound traffic on Delmar Boulevard.

See also: Want to see a play-by-play of the shooting and car crash? We break it down with photos from red-light cameras.

Norman --who is a convicted felon and not allowed to possess a gun -- crawled through the shot-out back window of the car and stashed his weapon, a 9mm semi-automatic pistol with 27 rounds in the magazine, under a car in front of the Moonrise Hotel.

At the hotel, Norman washed off blood from the gunshot wound in the bathroom and headed to the front to steal a car. Here's how he pulled it off, according to the U.S. Attorney's Office:

After trying to clean up a bit as he was bleeding, he left the restroom and convinced the valet that he left something in his car which the valet had just parked for another patron. The valet gave Norman the keys and without permission of the owner, Norman left the parking lot with the vehicle.

Police recovered the car nearly a month later on January 25.

Norman pleaded guilty to one felony count of possessing a firearm as a felon. He faces a maximum penalty of ten years and/or fines up to $250,000 at his sentencing in July 2014.

Norman also faces one felony count of stealing a car.