A Washington Post article this week reported on the rise of heroin coming into the United States and mentions Mexican drug traffickers' "shrewd marketing strategy": targeting areas where prescription-drug abuse is high, including St. Louis.

According to the story, drug cartels aren't making as much money on marijuana, mainly because laws are changing in the U.S., and the need for Mexican weed isn't as high as it once was. The cartels are still making money off of cocaine and human trafficking, but cartel leaders have mansions and tigers to pay for, so heroin is coming into the U.S. at a greater pace.

But the cartels aren't just picking areas of the U.S. at random. Rather, they've decided to cut in on the pharmaceutical companies' action:

DEA officials say the spread is the result of a shrewd marketing strategy developed by Mexican traffickers. They have targeted areas with the worst prescription pill abuse, sending heroin pushers to "set up right outside the methadone clinics," one DEA agent said.

The rise in heroin usage in the St. Louis area over the past few years has been much talked about. And prescription opiates, such as hydrocodone and oxycodone, have often been blamed for being the "gateway drug" for heroin users.

That still appears to be the case, but going from prescription pills to heroin seemed like a natural progression on the road of drug abuse, not a result of narco-marketing. If Mexican drug cartels are indeed purposely targeting areas of the country with significant prescription-drug problems, it means people with painkiller addictions are being tempted by a cheaper, often easier-to-get drug that has been brought in the country to cater their needs.

Although this sounds a bit like a conspiracy theory, it makes sense. Missouri isn't the biggest prescription-drug abuser, but it's up there: The state of Missouri ranks 20th in the nation, according to the Substance Abuse and Mental Health Services Administration. 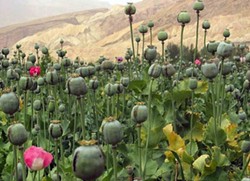 And as any businessman knows, it's never a bad idea to go straight to the customer. But St. Louis has an especially acute problem due to its demographics and geography. First, its pill addicts are young (the National Institute on Drug Abuse says about 25 percent of its pill addicts in St. Louis are under the age of 24), which means they're more likely to experiment with a drug they haven't tried before. Also, St. Louis is close to Chicago, which is a major hub for heroin trafficking.

If you want to delve further into some serious conspiracy theories, the Sinaloa drug cartel, which is responsible for about 80 percent of the heroin in the U.S., is rumored to have worked with the Drug Enforcement Administration. According to a January article by Mexican newspaper El Universal, the DEA gave the Sinaloa cartel some freedom to run its heroin-slinging operations in return for information on other drug cartels.

See also: The Physiology of a Heroin Overdose

Dr. Edgardo Buscaglia, a professor at Columbia University, told El Universal that the tactic of cooperating with an illegal drug organization for other motives is something that has been done in Colombia, Cambodia, Thailand and Afghanistan since the 1980s.

And Myles Frechette, a former U.S. ambassador to Colombia, said the tactic helped reduce drug trafficking from that country.

The relationship reportedly lasted between 2000 and 2012, so if that's true, it could be over. Still, it allowed a drug cartel ten years to establish a network and apparently develop a clever marketing strategy of selling heroin to painkiller addicts in St. Louis.