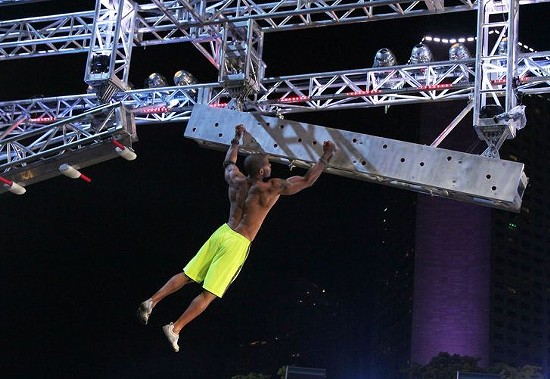 Can you run up sloped walls? Climb uneven surfaces? Leap from spinning (or rolling) platforms? Then you might have what it takes to be an American Ninja Warrior.

This weekend, for the first time in the NBC show's six season history, the extreme obstacle course competition is bringing its regional qualifying event to St. Louis. The action starts Sunday night at the Soldiers Memorial, where there will be "limited walk-on registration" if you think you have what it takes to finish the course.

Registration for walk-ons begins at 7 p.m. Sunday, and the competition kicks off at 9 p.m.. Spectators can try to grab the remaining tickets here, but be warned: The main qualifying event begins at 1 a.m. and could run about five hours.

The Sunday night/Monday morning qualifying rounds consist of six obstacles. On Monday, the survivors from the qualifying course will compete on an expanded course in the city finals, all in the hope of making it to Vegas for show's finale in June.

American Ninja Warrior attracts athletes of all stripes, and previous seasons participants included Olympians, NFL players, rock-climbers and all manner of extreme sports enthusiasts. The challenges are notoriously difficult; in fact, no on has ever completed the final stages of the Vegas course, known as Mt. Midoriyama.

"The beauty of this competition is that no one ever gets to practice on the course," Weed tells Daily RFT. "You have to rely on your skills and athleticism. You don't get to practice or try it out. You get one shot, and if you fall you're out."

The first episode of the new season will air May 26 on NBC, and Weed says the St. Louis episode will probably air June 9.