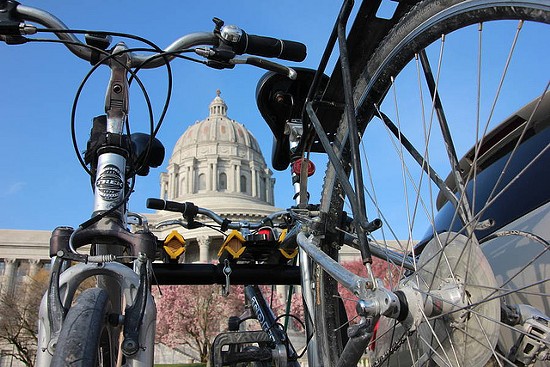 In what cycling enthusiasts are calling "the most important victory for bicycling in Missouri in 10 years -- and perhaps 100," an amendment cutting bicycles from potential transportation funding was defeated in a vote in the Missouri House on Tuesday.

The Missouri Bicycle and Pedestrian Federation called the news "easily the most important victory for bicycling in Missouri in the past ten years." And that victory will grow even bigger if Missouri voters approve the transportation funding plan at the ballot boxes in November 2014.

Representative Paul Curtman, a Republican who represents Franklin County, tried to cut the word "bicycle" completely out of a bill that would determine how Missouri disperses funds from a possible tax increase.

"Currently, in my county," Curtman explained before the vote, "we have bridges that desperately need work and/or are in danger of being closed."

Curtman didn't want those bridges and roads competing with bikes for future funds, so he tried to erase the word from the bill.

It didn't work. Instead, he unleashed a hailstorm of angry tweets, calls and notes from pro-bicycling advocates, which appeared to change his mind:

Had a great talk with @paulcurtman yesterday and he now understands our position. Thank you! #SupportMOBiking

More than 85 percent of the House Representatives voted against the amendment, according to the Missouri Bicycle and Pedestrian Federation. The transportation funding bill (HJR 68) now moves on to the Senate.