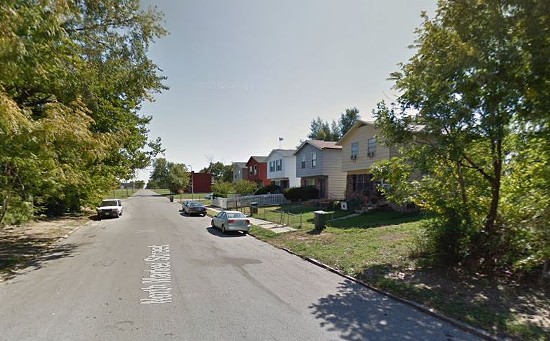 A shooting Sunday afternoon left a St. Louis woman dead and put three others, including a nine-month-old, in the hospital.

Four adults and a baby were in a car in the 2500 block of North Market Street, in the St. Louis Place neighborhood, when unknown suspects opened fire around 12:20 p.m., according to police reports.

Jeresha Gatlin, twenty, from the 1800 block of Warren Street just half a mile east of the shooting, was shot in the back. Gatlin was pronounced dead at the hospital.

Update, 3 p.m. Tuesday: May Thomas, one of Gatlin's former students, says Gatlin was on her way to church when she was shot and killed.

"She was just a very good student, very sweet," Thomas tells Daily RFT. "She was just one of those people that will do anything for you."

Gatlin was on the dean's list at the St. Louis College of Health Careers, and she had a 97 percent attendance rate. She was working with the school's office to find a job as a medical assistant, Thomas says. End of update.

A nine-month-old girl in the car was injured, but not by a bullet. Shattered glass caused a minor abrasion, and the girl was released from the hospital after being treated. A fifth passenger, a 23-year-old woman, was not injured.

St. Louis Metropolitan Police say they are still investigating the homicide, which is No. 36 in the city of St. Louis in 2014.