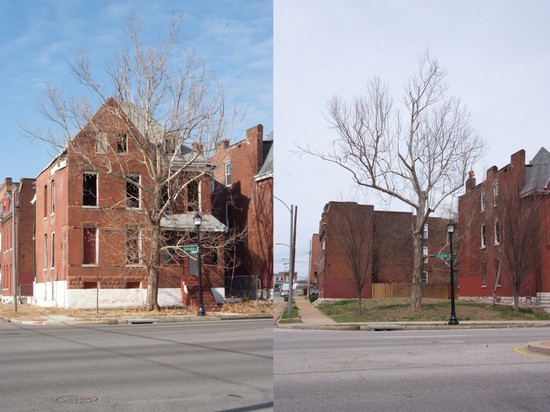 A lot can change in six years.

That's especially true for the historic and traditional brick buildings that cover St. Louis, where just six years can mean the difference between rehabilitation and total ruin.

As a student at St. Louis Community College's building inspection program, Fogleman says he can spot a building that's too worn down to survive much longer.

See also: 6 Local Urban Explorers You Should Be Following On Instagram

"I can look at the thing and say, 'This sucker's going to fall,'" Fogleman tells Daily RFT. "I can smell it. St. Louis is pretty ripe."

Fogleman says he often takes photos of street signs or addresses when he's out snapping pictures as a way to remember where he was. When he spots a building that's newly torn down or rehabilitated, he finds a photo from the past and recreates it.

Fogleman rails against the landowners -- or "coked-up banker guys," as he calls them -- who let buildings fall to waste.

"We just let rotten shitholes blossom right on our riverfront," Fogleman says. "Sometimes it would be better to just let a field grow than to let a human mess with it."

Fogleman spots a lot of his potential photo subjects while driving around the city.

See more photos of St. Louis then and now on the next page.

Not all the photos show rebirth or ruin. Six years later, this property stays stagnant, but a sign on the brick promises new condos coming soon.