Ever since Governor Jay Nixon altered Missouri's tax code to allow legally married gay couples to file joint taxes -- a move that puts the state in line with federal rules -- anti-gay marriage advocates are pulling out every trick in the book to stop him.

First, they filed a lawsuit. Then Rep. Nick Marshall tried to impeach Nixon.

The final trick in the anti-gay marriage playbook was a restraining order from four of Missouri's most committed conservatives who say changing the tax rule is tantamount to legalizing gay marriage in the Show-Me State.

But a judge denied that restraining order Friday so that, barring any unexpected developments in the next eight days, gay couples legally married in other states can file taxes in Missouri jointly.

Cole County Circuit Judge Jon Beetem scheduled another hearing for the case in May, but for now, he ruled the restraining order did not establish that the petitioners would be irreparably harmed by the state accepting joint tax returns from married gay couples. 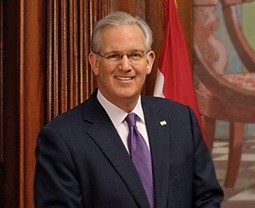 "The ruling provides certainty to Missourians who are preparing to file their taxes before the April 15 deadline," says Nixon.

"Missourians are fair and reasonable people and never intended to cause the kind of harm families would experience if they could not file combined tax returns in their home state," said Tony Rothert, legal director of the American Civil Liberties Union of Missouri. "We are gratified that the court's decision found that there is no harm to some Missourians when other married couples file a combined state income tax return."

Attorney Mike Whitehead, who represents the petitioners, said his clients were happy to move forward with the next hearing in the case, which is scheduled for next month.

"We are glad the judge set a May 2 date to schedule these next steps as soon as possible," Whitehead told the Associated Press. "It is the final judgment that is important."