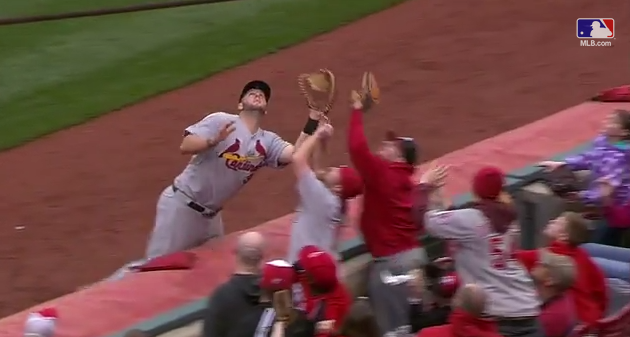 Cincinnati Reds fan Chris Smith came to Thursday's game against the St. Louis Cardinals with his glove in hand, ready to catch a foul ball from his seats on the first base line.

But he caught a lot more than that after a video of Smith snatching a pop-up ball just over the glove of Cardinals first-baseman Matt Adams went viral Thursday night.

Adams falls into the stands glove-first to catch Chris Heisley's foul ball. Once he lands, he sees that Smith caught the ball, gives him a little shove with his glove and picks himself off the tarp, turning away in time to miss Smith taunt him with the ball and throw up a one-fingered salute.

"He gave me a shove and I fell back," Smith told the Cincinnati Enquirer after the game. Smith had crutches and a knee-brace at the game. "I'm pretty sensitive about my knee right now. I'm fresh out of surgery. It's nothing to joke about."

Adams says he would have caught the ball if Smith hadn't reached above him.

"I was in line for it when I hit the tarp," Adams tells the Enquirer. "I heard [the ball] hit his glove and figured he caught it because I didn't feel it come into mine. I was just trying to stop from falling in there."

Video clearly shows Adams giving Smith a hard tap on the chest with his glove, but Adams says it's not like he was trying to hurt the guy.

"I'm not that type of guy to go after anybody," Adams tells the Enquirer. "I was just trying to stop from going into the stands and stop from falling in there."

"I heard the whole section was flipping me off," Adams tells the Enquirer. "But I can't let that bother me."

The Cardinals eventually beat the Reds, 7 to 6.