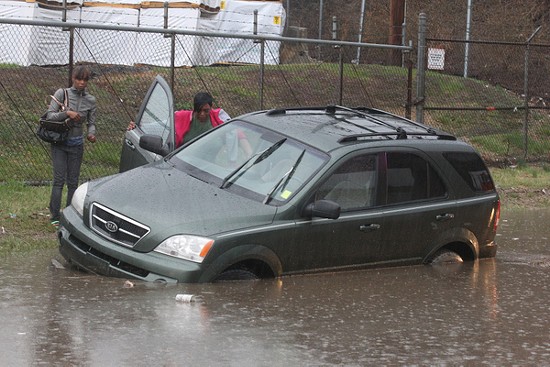 So far, this spring is shaping up to have as much extreme weather as the frozen winter St. Louis just survived.

A tornado touched down in University City at 5:23 a.m. Thursday morning, according to the National Weather Service. About twenty homes reported damage, including twisted and snapped trees.

No one was injured, according to an early-morning report from the National Weather Service Thursday.

St. Louis city and county arose to tornado sirens a little after 5 a.m. Thursday morning when the weather service started hearing reports of debris in the road in University City, especially damaged roofs and fences near McKnight Road and Olive Boulevard, according to the St. Louis Post-Dispatch.

Here's the scene on McKnight at Spoon Dr in #UCity. #stlwx pic.twitter.com/7af1R1hJ9P

Something fierce ripped through here. McKnight and Spoon in #UCity. #stlwx pic.twitter.com/8wXBswTZzD

About 2,000 University City-area neighbors lost power in the early morning, as well as 6,200 households in Madison and St. Clair counties, according to the Post-Dispatch.

Officials are clearing some University City homes to find the source of a possible leak after residents complained of smelling gas.

So far, Thursday's storm, which followed a day of rains and flash floods that left motorists just north of St. Louis stranded, hasn't caused any reported deaths or injuries, although the tornado sirens did cost these hotel-stayers a good night's sleep:

5:30am Tornado Sirens in downtown St. Louis. Everyone in hotel basement. All good now. We got free donuts! pic.twitter.com/9tJeVzZsG2