For Missouri's LGBT population, the struggle to join the ranks of those protected from workplace discrimination -- like racial minorities, women, immigrants and the disabled -- is entering its fourteenth year.

But LGBT advocates say things have changed since 2001, when lawmakers first attempted to add sexual orientation to the state's Human Rights Act.

Nowhere is the shift on LGBT issues more evident than with Republican State Representative Kevin Engler, who sponsored the 2014 Missouri Nondiscrimination Act (MONA) in the House. He's the same legislator who sponsored the referendum to ban same-sex marriage in Missouri in 2004.

Though Engler's fundamental opposition to same-sex marriage remains unchanged, he argues that traditional or religious values are not consistent with state-sanctioned discrimination against LGBT employees.

"The vast majority of people don't think it's fair that someone can be fired in Missouri strictly because they tell somebody they're gay," he says. "That's something that my right-wing colleagues don't understand."

Engler makes a nuanced distinction between religious beliefs and the state's obligation to fairly protect the rights of its citizens, but too many conservative lawmakers aren't making the effort to communicate that distinction to constituents, he says.

"They either don't want to believe that their constituents can differentiate between same-sex marriage and discrimination, or they don't want to go through the time of explaining it to them," Engler tells Daily RFT.

"And," he adds, "if you're making the argument on the biblical basis, there's no place in the New Testament where Jesus says that we should persecute these people." 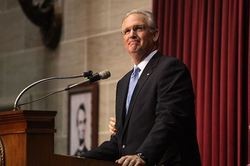 Even with the opinion polls showing broad support for MONA, and with numerous businesses already prohibiting such discrimination in their own workplaces, the legislative effort to pass the bill will likely go down to the wire. Last year, MONA managed to squeak through the state Senate for the first time ever, with bipartisan support no less. But in the final hour of the legislative session, the bill died in the House.

"Polling indicates that support for nondiscrimination is well over 70 percent, and 90 percent of the population thinks it's already protected," says PROMO executive director A.J. Bockelman, citing data from a February 2014 survey from the Public Religion Research Institute.

"We did have a strong vote out of the Senate last year, so we're hoping to get the vote out of the House this year," he says. "More and more Information is being given to elected officials, they're starting to change their minds. They might not be fully there yet on marriage, like Kevin [Engler], but I do think there is strong lean from the moderate Republican side to finally get the issue taken care of."

Last month, officials from the Missouri Chamber of Commerce and Associated Industries of Missouri publicly opposed MONA during a hearing about the bill. According to Missourinet, both organizations expressed concern about the glut of lawsuits that could result from enacting state protection for gay employees.

You can read Progress Missouri's full brief on LGBT workplace discrimination in Missouri on the next page.

Below is embedded Progress Missouri's brief on LGBT workplace discrimination. You can read the national report by the Movement Advancement Project here.