The Evening Whirl is Tweeting Stories of Pimps, Drugs, Heartache in 140 Characters or Less 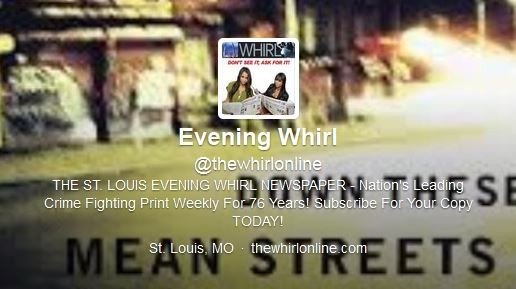 These are the kinds of characters and tales that have made the St. Louis Evening Whirl a St. Louis institution since 1938. And ever since the iconic paper started (seriously) tweeting in February, it is what has made its Twitter feed one of the best 140-character reads on the Internet.

The Whirl's tweets are distilled samples of the pulp-fiction style that the paper is famous for. And Brian Ireland, the paper's managing editor and author of the tweets, uses the required brevity on Twitter to produce short scenes about fascinating urban crime characters for which is paper is famous.

The scenes that Ireland writes about are mostly facts with a bit of fictional flourish. Sometimes they're observations of people he sees on the street or summaries of a stranger he made small talk with outside a convenience store. Other times they're the scraps of a story that couldn't be finished due to a subject reluctant to go on the record with a case still pending.

See also: As the Whirl Turns: St. Louis' crime tabloid is still dishing the dirt after 66 years -- and the cops love it

"At the very root it's a true thing, but it's colored in kind of a fictionalized writing, which is what the paper is," Ireland tells Daily RFT. "We're a weekly, and people don't really buy the paper for the latest news -- we would hope they buy it for the reason they buy, say, Flannery O'Connor or Mickey Spillane."

Wind wraps itself around a moan as SLPS teen trespassing on the N. Side comes upon a grisly cold headstone: "Boo Lewis Lived and died Alone"

A long, dark colored Cadillac floats onto the old Spruill's lot. A curvy, butter-pecan tart steps out. She wobbles a little on high heels.

Ireland says he tries to give the tweets that Southern Gothic feel -- a bleak but literary description of downtrodden life made famous by the likes of O'Connor and William Faulkner. But this is St. Louis, and Ireland uses the Whirl's Twitter feed to give a literary flair to the oft-ignored parts of the Arch City, so you can call it "Urban Midwestern Gothic" -- in under 140 characters.

Mid-County crime vic in a long black veil laments to Whirl that "You don't know about sadness 'til you've faced life alone."

A ten-year veteran of the Whirl, Ireland is a St. Louis native from Florissant and a Mizzou graduate. After college he went to law school in New York City for a while, but he didn't like the idea of being a lawyer all that much, and moved back to his hometown. And although he grew up in the area, Ireland wasn't familiar with the Whirl until he came back from law school and picked up a copy at a bookstore one day.

Ireland liked what he saw, wanted to get into writing, and called up Anthony Sanders, the editor-in-chief of the Whirl. He asked for a job. It just so happened Sanders was looking for somebody to help with the paper's layout.

"It was good timing," Ireland says. "I wasn't interested in doing law, and this allowed me to pay my bills and still be able to write."

Ireland has been a part of the Whirl ever since.

But before he worked at the Whirl full-time, Ireland was a case worker at New Life Evangelistic Center, which allowed him to get to know St. Louis' downtrodden on a personal basis. He still does some work at the non-profit organization, where he co-hosts a news and views show on Channel 24 with Larry Rice, the founder of New Life. And after he hears about people who are down on their luck, Ireland might post a tweet that replaces fictionalization with social critique. See also: Petition Will Ask City to Cede Land for Homeless Camp

The tweets Ireland writes are meant to tell snippets of stories that give readers just enough information to imagine what's happening. The downtown don worried about spending time in prison -- maybe because he's too old to be a don in today's game. A well-known gambler who dropped $5,000 on a basketball game -- and might lose, which could explain why he's so well-known. The struggling musician who might be wondering why he keeps on playing.

Downtrodden Soulard guitar picker plays with his eyes closed to a near-empty room, lost in the booze & the words of lost love and betrayal.

Despite the Whirl having one of the most unique and fun-to-read Twitter accounts in journalism, the old-school paper is still working on developing its website. In the meantime, the actual paper can best be appreciated the way it has been since 1938: on paper.

So until you can grab a copy, read the tweets.

Click on the next page to see some more classic Urban Midwest Gothic Twit-Lit...

It's beer-30 for "South Side Sam," a barfly with a pistol in his boot who can't pass the test to get into the Navy. Contemplating contraband