This Baby Shower Was Probably Bigger Than Your Wedding [PHOTOS]

Dzevad and Selma Halilovic didn't have a big wedding.

The Bosnian Romani couple married and had a small family party before trying for twelve years to have a child.

"We wanted kids, but nothing was happening," Dzevad Halilovic tells Daily RFT.

Finally, Selma got pregnant. And the day baby Lorenzo was born, the Halilovics knew what to do next.

"We thought, 'We're going to throw Lorenzo a really big party,'" says Halilovic. "We've got a baby now. This is our everything."

The couple decided to throw a baby shower, which typically takes place after a baby is born in Bosnia.

"That is the tradition," says Halilovic. "We've been doing it for a long time."

But it wasn't just any baby shower. Little Lorenzo celebrated his long-awaited arrival in the world at a grand affair more akin to a bridezilla's dream day than to a typical baby shower.

In five months, the couple planned a baby shower for 250 people, mostly family, at Grbic Restaurant, founded by one oldest Bosnian families in St. Louis. They chose a color scheme -- silver and blue -- and draped the restaurant in coordinating fabric and crystals.

Halilovic wanted little Lorenzo to be the center of attention, so Grbic built him a special stage, complete with a decorated crib.

The best part? The "Gucci" cake. "Because it's high class," says Halilovic. 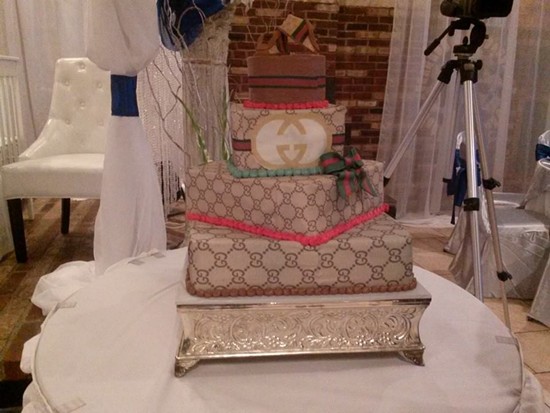 Now that the big party's over, the Halilovics only have six months before their next big event: Lorenzo's first birthday. Halilovic says he wants something just a bit smaller than his extravagant baby shower.

"We have some planning to do," he says.

But how will they ever top this?