Gay couples may be constitutionally banned from marrying in Missouri, but this year, for the first time, LGBT people who marry in other states and pay taxes here are allowed to file jointly, like any other married couple.

Conservative, "pro-family" activists want to change that. They've tried lawsuits. They've tried impeaching the governor, who changed the rule in the first place.

Now, they're trying a restraining order.

Three weeks before tax day, four of Missouri's staunchest conservative activists filed a motion for a temporary restraining order in Cole County Circuit Court to stop Missouri from collecting taxes from same-sex spouses married in other states. The motion claims accepting taxes from married gay couples violates the voter-approved constitutional amendment that says marriage can only exist between a man and a woman.

Taxpayers "have suffered, and will continue to suffer, immediate and irreparable harm," the motion says, because Governor Jay Nixon issued an executive order in November allowing joint filing to bring Missouri tax codes in line with the U.S. Department of the Treasury and the Internal Revenue Service.

"No one believes that the Missouri Legislature intended that, in the event the federal government chose to recognize same sex marriages, Missouri law would just incorporate such recognition, allowing the federal government to control marriage law," the motion reads. "The governor acted now, but executive degree, to 'fix' the problem in a way that is consistent with his evolving views of marriage but which is not consistent with our current Constitution." 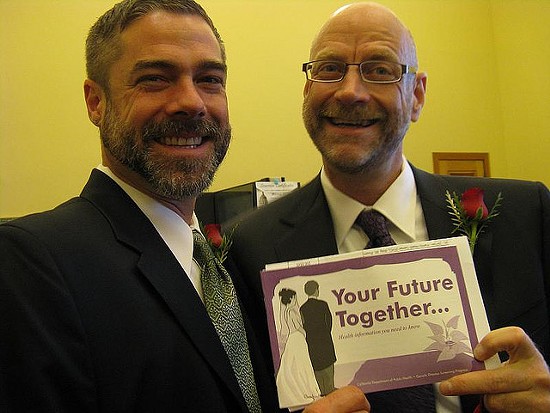 PROMO, the statewide LGBT rights organization, says there's nothing about taxes paid by gay couples that cause Missouri "irreparable harm."

"The only harm that I see is at the cost of the couples who have paid their taxes for years without having their relationship recognized," says executive director A.J. Bockleman. "Other states, such as Kansas where they also have a constitutional amendment, but do not allow joint filing, will require couples to file a total of five returns between state and federal. I fail to see how anyone is specifically harmed by a couple filing their taxes jointly."

Changing the tax laws doesn't loosen Missouri's restriction on gay marriage, but it will cause the state to "expend public funds to plan, prepare and train employees for, to communicate, publish, mail, and post" a new process for accepting returns from married gay couples, according to the motion. For example, tax paperwork may ask the name of "yourself" and your "spouse," not for the names of the "husband" and "wife."

And that's exactly what the four men who filed the temporary restraining order Wednesday don't want.

The restraining order won't go into effect unless a judge approves it.

LGBT See You in Court!