"Aunt Claudette" Is A Proud Troll We Can't Help But Love

Who is Claudette Higgins, really? Is she the intrepid, neck brace-wearing journalist who chases down interviews in parking lots and accuses Target of hating fat people? Or is she the doting aunt of Justin Bieber?

When Daily RFT wrote about "Aunt Claudette" last week, many commenters took her pretty seriously, especially her interview with a woman in a Target parking lot who suggested the store stop carrying snacks if it won't carry enough plus-size clothing. But for our more discerning readers, you've probably guessed the truth.

"I consider myself one of the oldest trolls on the internet," says Libbie Higgins, a 40-year-old special needs teacher from Maryland Heights. She's been trolling in relative obscurity since 2007.

Higgins created the Aunt Claudette character when she was just starting out as a video blogger on the live streaming site Justin.tv. That was where she honed the prim southern accent and earnest delivery that eventually landed Aunt Claudette's reportage on CNN's mecca of un-vetted community journalism, iReport.

For reference, here's that video again:

Remember that "Obese Shopper" whom Aunt Claudette interviews in the Target parking lot? That's Libbie Higgins herself, of course.

"Some people don't understand it's a joke and it's satire, and they get angry. They think that I'm a hillbilly," Higgins tells Daily RFT. She was particularly startled by how quickly some commenters were to join in on her mock fat shaming in the Target video.

"You can't take things personally, first of all, because people say horrible things on the internet. I think it's fun to make them wonder, 'Is this real? is this real life?'"

In fact, Target's shortage of larger sizes wasn't made up, and the store's customers -- including the real-life Higgins -- really are affected by the store's thin-friendly inventory. Higgins says she sometimes incorporates her own life or social commentary into her videos.

Other times, she stands outside Hustler Hollywood while waving a giant purple "dilder" at Larry Flynt.

Continue for more of troll wisdom from Libbie Higgins. 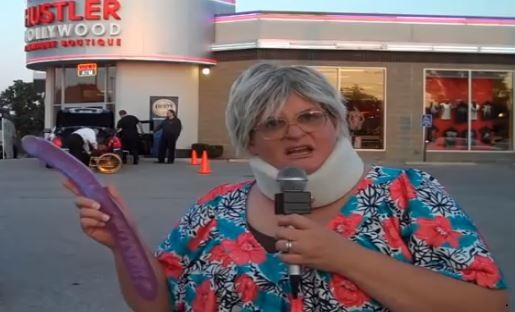 CNN's iReport is just the latest in a string of video platforms were Higgins has appeared in the last six years or so. Much of her early work is still viewable on Justin.tv, the site where she debuted her first character, a freaky girl with black-and-pink pig-tails named Trixie Higgins, in 2007.

"I didn't think I would get any viewership just by talking like most of the people were doing. So I had to do something crazy," says Higgins of those early trolling years.

Another troll-friendly site, Battlecam.com, let's two webcam bullshitters go at it head-to-head; online voters either "like you up," or "poop you off," as Higgins puts it. The site has a large stable of guest hosts, including Ron Jeremy, which is the reason why this glorious photo exists:

Higgins' most successful platform, however, is the micro video blog Vine. Her account, The White Trash Network, boasts over 25,000 followers.

See more of Higgins' Vines on the next page.

Higgins frequently uses Vine to post outtakes and extras from her YouTube videos. Here are a couple from her "Target Hates Fat People" opus.

Like any good troll, Higgins isn't afraid to turn on the sacrilege.