In case you didn't catch the latest issue of Canadian Traveller, the magazine that boasts a "Canadian perspective of how Canadians travel," St. Louis is a paradise for any tourist looking for a big vacation on a minuscule budget.

"When it comes to looking for free things to do, St. Louis is one of the best cities in the world," the magazine says in the story "The Skinflint Guide -- Nine Ways To Keep An Eye On Your Bank Balance in St Louis." 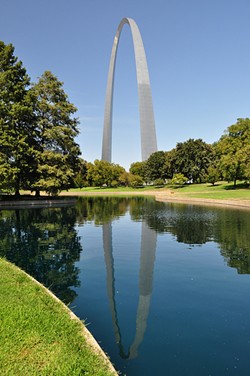 "The city is stuffed with glorious national landmarks, awe-inspiring wildlife attractions, and art and sculpture museums that won't cost you a dime."

And it's true. St. Louis is a cheap traveler's dream. The zoo, the history museum, the brewery tours -- they're all free.

Canadian Traveller starts by pointing readers to the Saint Louis Zoo, where only the special amenities like parking, the children's petting zoo, behind-the-scenes tours and the train cost money. Hanging out with elephants, penguins and butterflies? That part's free.

The free sights start before families even enter the zoo grounds. Canadian Traveller makes a special point to highlight the "giant rust-colored steel sculpture" in the zoo's southeast corner, where 60 different animal heads poke out from behind steel bushes and trees.

"This massive statue made from 100 tons of steel is the largest sculpture in any zoo within the United States," the magazine says.

Speaking of large statues, Canadian Traveller also points tourists to the iconic Gateway Arch, the tallest monument in the United States. A ticket for the oompa-loompa tram to the top of the Arch costs $10, but admission to the Museum of Westward Expansion on the ground floor is free.

"[The Museum of Westward Expansion] hosts a slew of exhibits on the 19th-century pioneers like Lewis and Clark and the Native Americans they encountered along the way," the magazine says.

And there's one more statue/sculpture destination that won't cost you a thing: Laumeier Sculpture Park, home to more than 70 different sculptures from internationally renowned artists.

"All of the sculptures that sit within Laumeier Sculpture Park are a testament to human creativity," Canadian Traveller says.

And for book-lovers out there, Canadian Traveller has one more (free) suggestion: Head to the Missouri History Museum Library and Research Center in Forest Park.

"It is a rare thrill for bibliophiles to get their hands on old diaries and manuscripts from the 1800s when St Louis served as the last beacon of civilization before the Wild West," writes Canadian Traveller.

So to all our tourists from the Great White North: Welcome to the Lou! Now if only you'd spend some Canadian dollars.