Are you in the market for a 100 percent vacant, 1.1 million square-foot regional mall in southwest St. Louis County? Because, boy, do we have a deal for you.

Bidding is open online for Crestwood Court, originally Crestwood Mall, a shopping destination that opened in the '50s and became a neighborhood fixture until about ten years ago. The starting bid is $1,000,000.

Real estate agents from CBRE Group Inc., were brutally honest about the enormous amount of work needed to return Crestwood Court to its glory days of retail:

"Crestwood Court lost its market share and the mall closed its doors in July 2013," CBRE says about the mall on the auction page. "The linear floor plan, limited parking fields, and lower level food court are all factors of the property that have prevented Crestwood Court from maintaining its competitive stance. A significant re-development of the property will be necessary to meet the substantial demand of the communities that have relied on Crestwood Court for their shopping needs for decades." 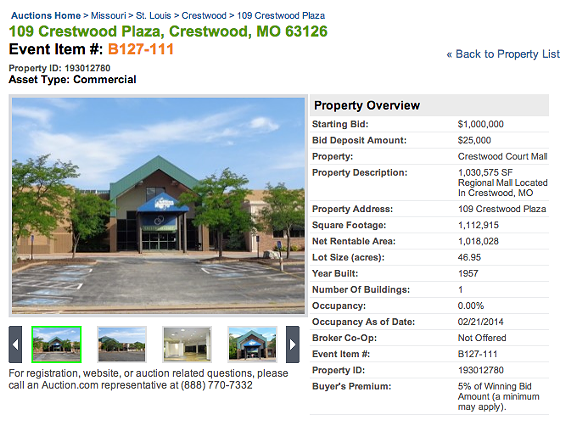 See also: The Time Has Finally Come for ArtSpace to Leave Crestwood Court -- For Now

Things started to really go downhill for Crestwood Court in 2007, when Dillards left, but the mall's revitalization efforts earned it the Riverfront Times' Best Mall in St. Louis 2009:

A casting call for the George Clooney flick Up in the Air was held here in January, and these days once-empty storefronts are home to theater and dance companies, a costume studio, the St. Louis Calligraphy Guild, a yoga studio, the perplexingly named shop I Don't Want to Kiss a Llama, and many others, transforming a doddering center of passive consumerism into a nexus of active creation. Perhaps this mall is best summarized by the storefront for Repurposed, which houses a display of shredded lampshades, peeling wooden chairs, mangled chandeliers and this sign: "It's not trash. It's not worn, it's not out-dated. It's not ruined. It is a 'been-there-done-that' that's about to go somewhere else...Repurposed. New life, new meaning."

By 2011, a lot of those arts groups were kicked out of the mall to make way for renovations. By 2013, the mall was dead for sure.

Agents say there's money to be made at the 47-acre, time-tested St. Louis County site for developers who can see past the big, dead building and imagine a "more modern, open-air mixed use concept" complete with "big-box retail, multi-family or medical office" businesses, according to the listing.

So maybe someone with deep pockets will see potential in the ol' mall -- for something besides urban exploring -- and restore it to its moneymaking ways. We're imagining a third outlet mall to battle the new ones in Chesterfield.