Cornell McKay Sentenced To Twelve Years For CWE Robbery: "I Know I Didn't Rob Her" 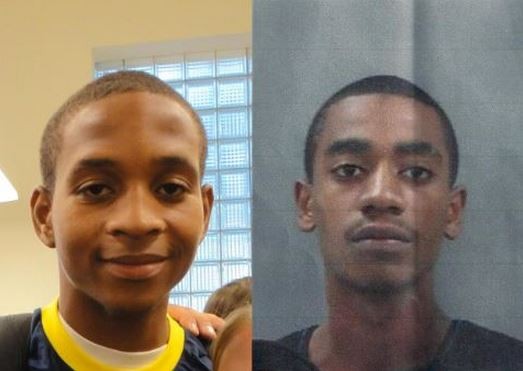 Adriane Smith -- Cornell McKay's mother -- grasped Tayra Douglas' right hand as Judge Robin Vannoy sentenced her son on Thursday to twelve years in prison. The relatively moderate sentence (prosecutors had asked for 20 years) ended an emotional hearing that featured testimony from the victim of an August 10, 2012 armed robbery. The victim is steadfast in her identification of McKay as the man who robbed her.

"This crime was forced on me," she told the court. "Mr. McKay made bad choices over and over again. I am in no way driven by vengeance. I told my story and my truth and I left it in the able hands of the court and jury."

But McKay's lawyers argue that he's an innocent man. During yesterday's hearing, they cited constitutional issues with his December 2013 trial and cast doubt on the integrity of the police investigation.

Pastor Chris Douglas and his wife, Tayra, treated McKay like a son in the months prior to his arrest on August 21, 2012. McKay lived in the basement of their Washington, Missouri home for weeks, and Douglas baptized him earlier that same month. The two attended McKay's sentencing yesterday with enough supporters from their church to fill the courtroom seats.

"Sometimes pastors are supposed to be behind the scenes, praying, on their knees," Douglas told Daily RFT after the hearing. "But there's other times that pastors need to stand up and fight, to blow the horn and expose the corruption that is going on in this justice system. That's what I'm going to continue to do."

The hearing began with testimony from the victim and her husband. The woman spoke at length, describing a life left in shambles after being robbed in front of her Central West End condo eighteen months ago. McKay's arrest and conviction rested almost entirely on her ID of him in police lineups.

"I became a person I didn't know anymore. I was scared to go anywhere or do anything alone, and I felt like a shadow of the independent person I'd always been," she said. "Seeing the light glint off the semi-automatic pistol he pointed at my stomach is a chilling memory I cannot shake."

Next to testify was Douglas. He pleaded with the judge that it simply was not in McKay's character to commit a violent crime. Like McKay's lawyers, Douglas alleges McKay was actually framed by detectives who missed arresting the real August 10 robber, Keith Esters -- the same man who shot and killed Megan Boken eight days later in a similar armed robbery in the CWE.

During the hearing, McKay's lawyers' again asked Vannoy to delay the sentencing in light of new evidence, including statements Esters made to Post-Dispatch reporter Jennifer Mann that strongly suggest his connection to the August 10 robbery. McKay's lawyers also accused police of deleting evidence from the victim's cell phone and questioned Vannoy's decision to limit evidence during McKay's trial that, they say, clearly links Esters to the crime.

Vannoy repeatedly stopped McKay's lawyers from presenting their new evidence during yesterday's hearing, explaining that re-litigating the issues of the trial would fall outside the proper bounds of a sentencing hearing.

Attempts to delay yesterday's sentencing were denied by both the state appeals court and the Missouri Supreme Court. Thomas SanFilippo, one of McKay's lawyers, says the next step will be a formal appeal to the state appellate court.

"The battle is just beginning," SanFilippo tells Daily RFT. He says prosecutors are concealing further evidence of how they coerced the victim into identifying McKay. He also contests the victim's claim that she saw McKay's face in daylight during the August 10 robbery, since, he says, the incident actually occurred at night.

Circuit Attorney Jennifer Joyce called the defense's allegations "baseless and without merit," and reiterated her stance that McKay's trial was fair. (See update below.)

McKay was the last to testify at the sentencing hearing. He thanked Chris and Tayra Douglas and the supporters from their church, and said he felt no bitterness toward the victim or her husband. It was the police, he said, who are responsible for framing him and ignoring Esters' obvious guilt.

"It's unreal that I have to go and be in a hellish environment for ten or twenty years for something I didn't do, around monsters like Keith Esters," concluded McKay. "I believe in myself, and I stand here today strong-willed. I wake up every morning, in the hell of a cell, and look myself in the mirror... and know that I didn't rob [her]."

Update 11:30 a.m.:Daily RFT spoke with Assistant Circuit Attorney Steve Capizzi this morning about the accusations of misconduct brought by McKays' legal team. In short, Capizzi says most of their arguments were exhaustively dealt with in the December 2013 trial.

"I believe in justice and I believe justice was served in this case. We have credible evidence and a jury of twelve people that I picked and the defense picked and the judge approved of. They found him guilty of this crime."

Continue to read why Assistant Circuit Attorney Steve Capizzi believes McKay is guilty of the robbery.

First of all, Capizzi isn't at all bothered by the statements Esters made to the Post-Dispatch -- namely, that Esters claims to know who committed the August 10 robbery. Capizzi says that's actually old news.

"That isn't new information to us, to defense counsel, to Mr. McKay or to the judge. It was all discussed when it happened originally," he says.

Esters had made similar statements to homicide detective Jerone Jackson back in August 2012. During the trial, however, Vannoy did not allow the defense to call Jackson as a witness, so the jury did not hear about Esters' claims.

"When a prosecutor has to make a decision, whom do I believe?" added circuit attorney spokeswoman Susan Ryan. "Do I believe the victim and her husband, who separately identified Cornell McKay? Or do I believe a guy who's been convicted of murder?"

Capizzi also addressed Douglas' allegations that police did not fully investigate McKay's alibi for the night of August 10 when the robbery was committed. He confirmed that the three witnesses who Douglas brought to District 9 headquarters were later questioned by prosecutors and detectives. However, he says detectives found another witness, the owner of a candy shop where McKay claimed to have visited right around the time of the robbery. The shop owner didn't see McKay come into the store that night.

In any case, Capizzi points out that Douglas' accusations about McKay's alibi are largely moot, since McKay's previous attorney, James Hacking, chose not to call the witnesses to testify at McKay's trial in December 2013. Hacking's reason for not calling them to the stand is still unclear.