You may not have noticed the nationwide march of white supremacists carrying signs that "'Diversity'=White Genocide" on Saturday.

That's good. You weren't supposed to.

Kyle Hunt, the 30-year-old organizer of the White Man March, a flash mob-style demonstration, told Riverfront Times' sister publication Village Voice that "outside media" would only make him and his fellow "pro-white" activists look foolish. 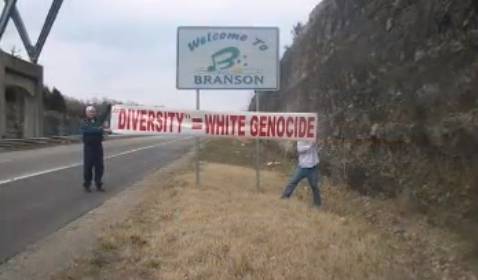 "If you show up at a place where the press is already there, you've got police, you've got the anti-fascists, I'd say take your people and go somewhere else," Hunt says on the white power podcast, White Rabbit Radio. "If there aren't any opposition forces there, we'll be the ones with all of the media. And we'll select out the pieces of media that make us look the best."

(Note: The host of White Rabbit, a guy who calls himself Horus the Avenger, is really Timothy Murdock, a 43-year-old Michigan guy living in his parents' basement, according to the Southern Poverty Law Center.)

National news outlets ran with the story that a White Man March was mercilessly mocked on Twitter (more on that later), but the demonstrators managed to carry their signs and post their pro-white messages without any actual news coverage. No outside media covered the event, and it's unclear how many people attended.

Photos of the "march," taken by participants, don't show many people. The people who are in the photos often obscure their faces. Otherwise, the march seems to mostly involved lonely banners about "white genocide" plastered onto gas pumps, anchored onto a toilet stall or carried along a road.

But the White Man March did get some buzz on Twitter, where Buzzfeed's Tracy Clayton (a.k.a. @brokeymcpoverty) offered the hashtag #WhateManMarchProtestSigns to hilarious results:

Continue reading for our favorite parody White Man March signs. But the White Man March did get some buzz on Twitter, where Buzzfeed's Tracy Clayton (a.k.a. @brokeymcpoverty) offered the hashtag #WhateManMarchProtestSigns to hilarious results:

Sure, I made fun of the #WhiteManMarch, but I think these guys make a good point... #WhiteManMarchProtestSigns pic.twitter.com/IZqmvPIdP6

What do want? Everything!! When do we want it? We already have it!! #WhiteManMarchProtestSigns

I only like two members of the Dave Matthews Band and I won't tell you who!! #WhiteManMarchProtestSigns

But was that more publicity than Hunt wanted? Not at all, he tells Village Voice.

"You and your anti-White friends helped us to trend on Twitter all day long," Hunt tells Village Voice news blogger Anna Merlan. "You degenerates really know how to put on a show."