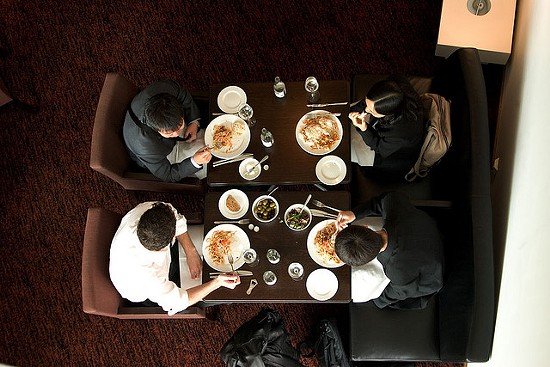 When Kirkwood School staff called KSDK NewsChannel 5 earlier this year to confirm that the stranger who'd wandered on campus was actually a reporter and to prevent a full-blown lockdown, they couldn't get an answer.

Turns out, everyone was out to lunch.

Thomas Williams, Kirkwood's superintendent, says the station explained to him that all the people who could have identified the reporter's identity were taking a midday meal when the school called, according to the New York Times.

Here's how the New York Times puts it:

[Kirkwood] Staff members called his phone number and it went to his voice mail, which identified him as a KSDK employee. When the school called the station to confirm, the station would not do so, even though school officials said they would otherwise have to order a lockdown...After initially defending its report, KSDK apologized to Mr. Williams, who said the station told him that the people who could have verified the reporter's identity were at lunch when the school called.

KSDK is not commenting on this story and did not confirm whether staffers were at lunch. News Director Mike Shipley previously told Poynter that the station returned the school's call after only a ten minute delay, by which time the lockdown had already begun.

But Kirkwood says it called the station long before the lockdown looking for answers. When KSDK asked Kirkwood Schools spokeswoman Ginger Cayce why it took an hour after their reporter left for the school to go on lockdown, Cayce says: "We were trying to confirm with Channel 5 that this was a reporter."

Undercover reports testing safety are nothing new. After the Oklahoma City bombing in 1995, a Tampa television reporter was "detained, questioned and scolded by federal agents" after leaving a Ryder truck parked outside of a federal building to test first responders' response, according to the New York Times.

"But in St. Louis," the Times reports, "something clearly went wrong."