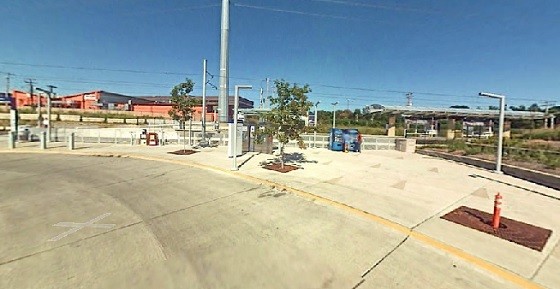 The son of a 69-year-old deaf man robbed and assaulted last week at a MetroLink platform isn't sure which is worse: that there was no security around to prevent his father from being mugged in broad daylight or that bystanders at the Richmond Heights' station ignored his father's pleas following the attack.

According to St. Louis County police, the incident occurred around 11:30 a.m. last Tuesday when the victim was purchasing his ticket at the automated kiosk. A suspect -- described only as a black male -- grabbed the victim's money as he attempted to purchase a ticket. When the victim held tight to the cash, the suspect struck him in the face and ran off with $22. See also: MetroLink Shooting: Akira Edmonds Allegedly Shoots Acquaintance Over "Disagreement"

Randy Moehlman, the victim's son, tells Daily RFT that his father was recently diagnosed with Parkinson's Disease. Still, he remains active and frequently uses MetroLink to journey out for lunch. Moehlman says his father was doing just that last Tuesday when he was mugged and assaulted at the MetroLink stop.

"There were at least a half-dozen other commuters on the platform who saw this and heard my dad's screams," says Moehlman. "But they just chose to ignore him, and my father being deaf can't call the police himself."

Help arrived only after a woman getting off a train noticed Moehlman's bloody father and dialed 911. But since she had not witnessed the robbery, she was unable to offer police assistance.

Reached for comment late last week, Richard Zott, chief of public safety for Metro, could not tell Daily RFT why security was not around to prevent the robbery.

"We have fixed security there but they could have been in the parking lot or on the train," says Zott. See also: MetroLink Mugging Thwarted by Cup of Coffee The incident remains unsolved and under investigation. And while security cameras did not capture the mugging, video from the time does confirm that fellow commuters did nothing to assist the victim following the assault.

"It's a sad state affairs when someone is hurt and no one steps in to help," notes Zott.

On that point, Zott and the victim's son can agree.

"My faith in human decency took a serious hit this week," says Moehlman. "I certainly would not expect someone to jump in the middle of a physical altercation and be 'superman' because you never know if the person has a weapon. But what disgusts me, what I find despicable, is the lack of human decency by the people who were around the scene at the time. Not one person stuck around to help after the guy ran off. Not one person called 911 while it was happening. Not one person stayed to offer first-hand accounts, give statements, help ID the suspect. No one."

Moehlman says that his father -- who asked not to be named in this article -- is back from the hospital and recovering from the bloody lip sustained in the assault. The bigger setback from the robbery, says Moehlman, is what it could do to his father's independence.

His dad no longer drives more than a mile or two from home and had relied on MetroLink for longer journeys. Now he's not sure he'll ride the light rail again.

"And can you blame him?" asks Moehlman.