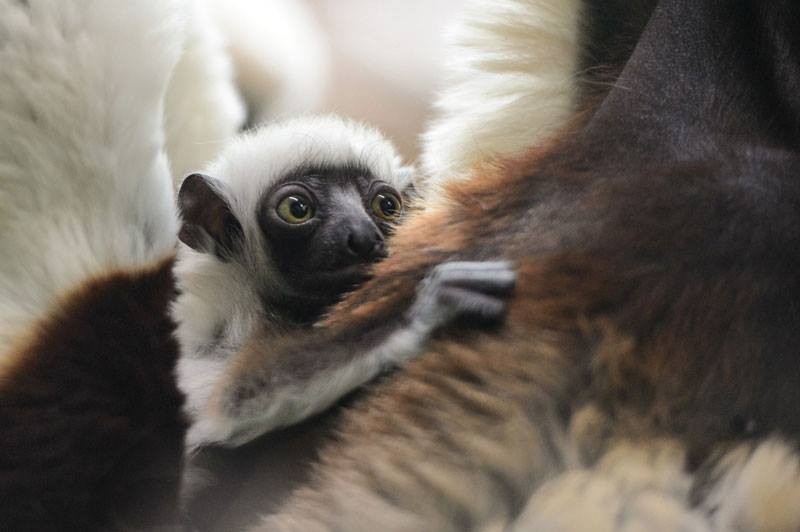 There's a brand new baby at the St. Louis Zoo.

Kapika, a female Coquerel's sifaka (sh-fahk) -- a type of lemur -- was born at the zoo's primate house on January 21, and the zoo says she's now ready for visitors.

Kapika's name means "peanut" in Malagasy, the language of the animal's native home of Madagascar, the fourth largest island in the world. Sifaka lemurs face extinction in Madagascar, where their forest homes are logged for timber and turned into farmland.

Sifakas are named for the alarm cry they make when they see an enemy: SHEE-FAAH-KAH!

Watching sifakas walk is delightful, if charmingly odd; the monkeylike lemurs bounce on their powerful hind legs in an adorable skip-dance, holding their arms out for balance.

They can also use their long, froglike legs to lean more than 30 feet from tree to tree.

Baby Kapika, who is now a month and a half old, is the fourth baby for mother Almirena, twelve, from the Los Angeles Zoo, and father Caligula, sixteen, from Duke Lemur Center. The entire family, including Kapika's big sisters two-year-old Martine and three-year-old Sophie, now live at the zoo's primate house.

Babies like Kapika hold on to Mom's belly for about a month before they "graduate" to riding on her back, according to the zoo.