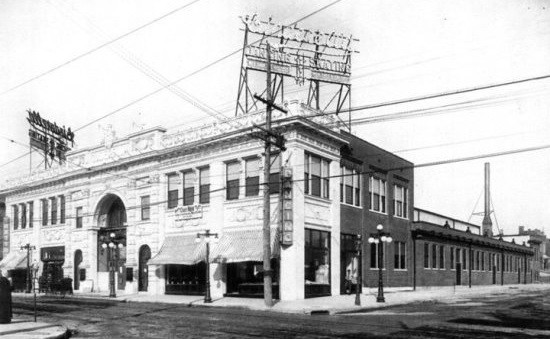 The Cinderella Building proudly sits in the middle of the booming Cherokee Street shopping district just west of Jefferson Avenue. It is easily one of the largest buildings around and continues to host a variety of businesses on its first floor. Continuously occupied since its construction, the once grand building underwent a misguided "enhancement" decades ago that defaced its architecturally significant façade. Enter now Will Liebermann, the Cinderella's current owner, who is working to return the building to its original glory. 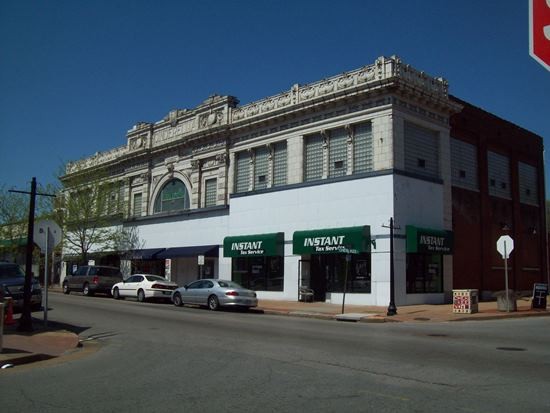 The Cinderella Building began life in 1913 as a skating rink built and operated by Harry and Eugene Freund. Two years later they converted their building into a movie theater, and the Wehrenberg Theater chain purchased the building in 1932, using the second floor as their corporate offices for several decades. As business declined in the 1950s, Wehrenberg closed the theater and left Cherokee Street. While the first floor storefronts remained occupied, the rest of the building fell into disuse until the St. Louis Juvenile Court moved into the office space.

The Cinderella Building is a triumph and tribute to the versatile skills and craftsmanship of St. Louis terra cotta in the early 20th century. St. Louis produced millions of bricks to build this city, and the nation, but the role of terra cotta remains less well-documented. Terra cotta (literally "baked earth") consists of clay shaped into ornament and other decorations that is fired in a kiln. Terra cotta, unlike most brick in the city, often then received a coating of glaze in various colors to add personality and finesse to St. Louis buildings. In the case of the Cinderella Building, white glazed terra cotta creates a unified composition that befits its princess namesake. Sadly, as tastes changed in the in 1950s, the first floor's terra-cotta ornament came down, and more "modern," and incongruous, plain white tiles went up in their place.

Go to the next page to see the rebirth:

Liebermann, along with his designer Melinda Stewart and right-hand man Andrey Gura, have begun the arduous process of returning the façade to its original design. The first step, the removal of the white tiles which had scarred the front for decades, finished in late 2013. Sadly, their removal revealed that much of building's original decoration had been chiseled prior to the addition of the tiles.

Now, Liebermann and Gura are taking casts of original ornamentation that did survive in order to re-create lost architectural details. Craftsmen will then take the casts and use them to create reproductions of the original terracotta detailing. Finally, in the coming months, the new replacement terra-cotta ornamentation will replace the damaged or missing tiles on the façade. Historic photographs of the building provide clues of the building's original appearance as well.

For what it's worth, I am not a universal proponent of slavishly returning every building in this city back to its original appearance. Particularly on Cherokee Street, the interesting mishmash of different store fronts with early and mid-20th century renovations on 19th century buildings lends much of the charm to the street. Each storefront tells a story, and to remove them all would erase much of the history of Cherokee. But when such additions do not age well or detract from the original beauty of the building, as in the case of the Cinderella Building, I completely support renovations that return a building back to a more cogent and intact state. The current renovations of the Cinderella Building will restore some sense of the original glamor of the original structure. That's a good thing.

Please join me for a lecture on the legacy of the great American architect Louis Sullivan in St. Louis at 11 a.m. on Thursday or 6 p.m. on Friday at the Saint Louis Art Museum