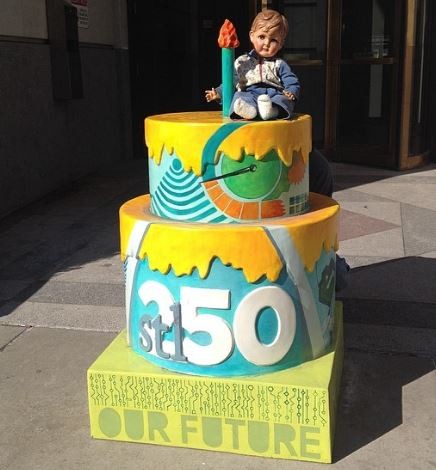 Johnny Slouch is a rockabilly baby on a mission.

Johnny's owners (parents?), Travis and Gina Sheridan, are taking him on a tour of the 250 birthday cakes strewn about the region in honor of the city's sestercentennial.

"Over 250 years St. Louis has really evolved, and sometimes, when you're in the midst of it, you don't see that," says Travis Sheridan, who moved to St. Louis in 2012. So he's joining his wife and their vintage doll (Sheridan doesn't like the term "creepy") on an adventure. "Even for legacy and long-term St. Louisans, the ability to discover new corners and new neighborhoods is a great benefit."

The couple dedicated two days last weekend to cake-spotting with Johnny. They found 29 cakes, mostly downtown and in Missouri's wine country in Augusta. On their way to find a cake in south St. Louis County, the couple says they stumbled upon the beautiful grounds at Kenrick Glennon Seminary.

"If there weren't a cake to look for, we probably never would have found this," says Sheridan.

The Sheridans aren't the only ones on a travel kick for St. Louis' birthday. They've already met other people doing the same thing, including a couple in their seventies who've photographed themselves with 38 cakes.

"I love that people are having fun with this," Sheridan tells Daily RFT. "It's a great conversation starter. It's fun to walk around and meet other people interested in exploring the city."

The Sheridans are also snapping pics (and Instagraming them) at each cake, but Johnny is the one getting the face time.

"We were like, yeah, we don't have to be in [the picture.] We have this vintage doll," Sheridan says. "It's a face that was made for Instagramming."

See more photos of Johnny Slouch with cakes and find out how he came to be the Sheridans' on page 2.

Sheridan bought the doll in California in 2010 for his wife, Gina, before she was even his girlfriend.

"That's a make-or-break type of gift," especially early in a relationship, Sheridan admits. But Sheridan didn't just wrap the thing in a box and put a bow on top. Gina had already owned a vintage doll named Edgar, but when it was lost, Sheridan says, he wanted to give her something new.

"Edgar had been missing, and I wanted to create a new doll life and story," he says.

Before Johnny was even introduced to his new mommy, he had a blog, Twitter account and an Instagram -- all populated by Sheridan, who also sent his future wife cryptic postcards from the doll. Johnny the baby doll describes himself online as "a highly active rockabilly baby. I am wise beyond my years, but my IQ was feeling a little sluggish. What I needed was a steady home."

But Johnny wasn't getting out of the house much until Gina had the idea to photograph him with all 250 cakes.

"It was really her idea to say, 'Let's bring Johnny,' like a good mom would," says Sheridan. "We get a lot of strange looks carrying a vintage doll around."