The nearest dentist's office probably isn't surrounded by a praying, chanting crowd right now. Same goes for the nearest cardiologist's or closest library. But for patients seeking the medical services at the Central West End Planned Parenthood, the visit is accompanied by insistent, pious protesters who cluster around the clinic's front driveway.

"By the time they get to our front steps, it's not uncommon for our patients to be in tears," says Paula Gianino, president of Planned Parenthood of the St. Louis Region and Southwest Missouri.

On March 5, the St. Louis-based Coalition For Life kicked off its "40 Days For Life" campaign, which will place anti-abortion protesters at Planned Parenthood's gated, compoundlike CWE location every day of the week for the next 40 days.

For the past few years, springtime in St. Louis has brought with it the "40 Days For Life" campaign. (The name is derived from its numerical significance in the Bible, such as Noah's 40 days on the ark.)

When Daily RFT visited Planned Parenthood on Friday, the picket line of so-called "prayer witnesses" was a bit thin.

Of the five or so adults present that day, one or two patrolled outside the fence, shouting questions in at patients and those just waiting in their cars. Others hung by the driveway to thrust pamphlets at car windows, approaching vehicles still in the process of making the hard right turn off Forest Park Avenue.

"We're just standing here in support of life," one protester told Daily RFT, though she declined to give her name. "We're not here to make discomfort or pain. We're here to show love, because God loves everyone."

Gianino and other volunteers say protesters come out in larger and louder numbers on Saturday. However, even small gatherings create tension at the entrance: In this freeze-frame from surveillance footage taken on March 5, an orange-vested protester can can be seen blocking the clinic's driveway.

"People don't know whether they're going to hit them," Gianino says. She's frustrated that city ordinances allow picketers to potentially endanger themselves and others by crowding the driveway.

"We're not trying to take away the picketers' ability to be outside our center and protest," she continues, "But there are legitimate public-safety issues here that I think are equally compelling to a First Amendment free speech issue."

This year, Gianino and her volunteer corp are trying something new: Planned Parenthood volunteers wearing blue vests act as escorts, encouraging drivers into the parking lot and walking the patients to the entrance. She says the tactic has been so successful that the escort program will become permanent after "40 Days For Life" concludes in April.

One volunteer told Daily RFT that protesters take photos of her and other Planned Parenthood staff, including of their license plates, and post the photos to anti-abortion websites.

Rounding out the protesters' ranks on Friday were four school-aged girls; they held signs, sang church hymns and drew messages in pink chalk across on the sidewalk in front of the only legal provider of abortion services in Missouri.

Indeed, while Gianino and her staff fret over patients walking through shouts of "Baby killer!" and "Mommy! Mommy! Mommy!", the clinic itself is under far greater danger from the Missouri legislature, which is currently considering more than a dozen bills that seek further restrictions on women's reproductive rights.

Continue to read how Missouri lawmakers are trying increase regulation on abortion in Missouri. 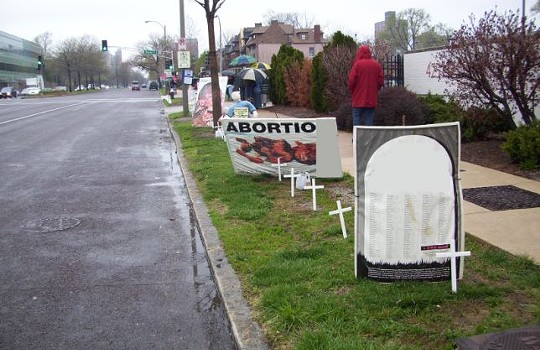 Last week, two Texas abortion clinics closed because they were not able to meet the new laws enacted last year by the state's legislature. The closures hit close to home for Gianino: The same laws that shut down the Texas clinics have been on Missouri's books for years.

As required by Missouri law, Planned Parenthood is a licensed surgery center, its doctors have admitting privileges at a hospital at least 35 miles away, and patients seeking an abortion must wait 24 hours before the procedure and receive state-mandated counseling.

The same day news broke on the Texas clinics' closings, the Missouri House approved a bill that would triple the state's mandated waiting period to 72 hours.

"The effects of waiting-period laws, whether they are 24 hours or 72 hours, have been studied for decades," says Gianino, who counts 26 anti-choice bills filed this year, what she says is a record number. "They don't decrease abortion. They do increase later abortion."

Clinic staff and doctors spoke to legislators during legislative committee hearings, but to no avail.

"We're very worried," Gianino says. "We're going to do everything we can to stop them from being passed."