Dog-Walkers to Client: "We Don't Walk Dogs for People Who Want Marijuana Legalized"

When news of a Girl Scout selling cookies outside a Colorado marijuana dispensary went viral last month, it had far-reaching consequences for a St. Louis family: They were "fired" from the dog-walking service they had been a customer of for years.

It all started when Tricia Moyer, a mother of two and a Girl Scout troop leader, thought the idea of a thirteen-year-old with the business sense to sell delicious Thin Mints outside of a marijuana dispensary was funny. So she did what tens of thousands of other Americans did and shared a photo on Facebook.

Tricia didn't realize that the owners of her dog-walking service -- Pack Leader, Plus Inc. -- are devout Christians who don't believe there was anything funny about it at all.

"[We] were upset by the pic with the Girls Scouts selling cookies outside of a government-funded drug house because they knew a bunch of whacked-out dope fiends would buy a bunch of cookies," said Tom Ziegler, co-owner of Pack Leader, Plus, told the Moyers in an e-mail. "We think this is appalling and not funny or cute."

And so the Zieglers decided to end their business relationship with the Moyers.

"We have a zero-tolerance policy," Tom Ziegler tells us. "We don't tolerate any drug users or people who think drugs are OK. Just like we wouldn't tolerate child molesters or rapists, we don't tolerate drugs."

Ziegler further explains that it's simply his faith and his beliefs, and he won't bend, not for man or government.

But Shawn Moyer says he and his wife don't even do drugs. They do believe that marijuana should be legalized, but that's about as far as it goes.

"Having that position and having the inside of your home look like Cheech and Chong's are two different things," Shawn says.

He also says that not doing business with someone based on their political beliefs is a form of discrimination.

"It's not that different than saying one only does business with Democrats or Republicans," he says. "I'm an atheist, and I overlook the fishes on the windows at the dry cleaners."

Shawn says they would normally just find another dog-walking service, but their two dogs have special walking needs. The dogs are rescues and had been abused and neglected for years before the Moyers adopted them. One result of that prior abuse was they had never been taught to walk normally, so they have to be run. 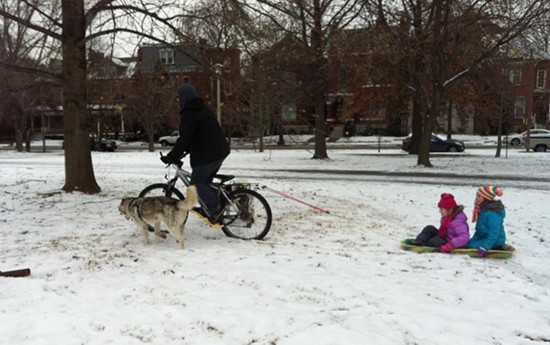 "The way I can make the dogs cope is to run them on a bike," Shawn Moyer says. "So I have two bike leashes I attach to a mountain bike and I run them a couple miles per day on the bike. And Brooke and Tom were the only ones we could find that were willing to do that."

And now the dogs don't have anybody to walk them when the Moyers go on vacation.

This comes just a few days after Arizona governor Jan Brewer vetoed a controversial bill that would have allowed private businesses to refuse services to people based on their religious beliefs. The bill was widely described as a way to legalize discrimination against gays and non-Christian religions.

Here in Missouri, state legislator Wayne Wallingford introduced a so-called "religious freedom" bill that also would have allowed people to refuse services based on religious beliefs.

So we ask you, dear readers: Should a business be allowed to refuse customers based on his or her stance on marijuana?