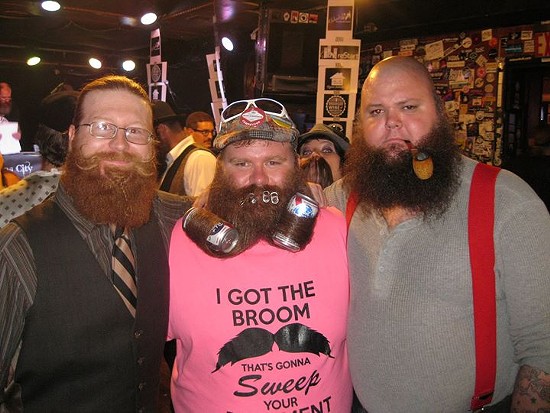 For the president of a club about men's facial hair, Richie Darling is actually quite the feminist.

"To hold office and vote on important club things, you have to have facial hair, which makes it a men's club by default," admits Darling, founder of the St. Louis Beard and Mustache Club."But I like to be inclusive as a leader. I don't want to be exclusive."

To even out the gender imbalance, the club is holding a fundraiser, the Facial Hair Competition, this weekend at Llywelyn's Pub in Webster Groves and donating the proceeds to the Covering House, a shelter for girls who are victims of human trafficking.

"This is a way for an all-male club to do a charity event for female victims," says Darling. More than 70 people from as far away as West Virginia and New York have already signed up to compete in the facial-hair competition, where five judges will assign scores to men's facial hair (and to competing ladies' fake mustaches and beards) based on size, density, color, symmetry, grooming and creativity. 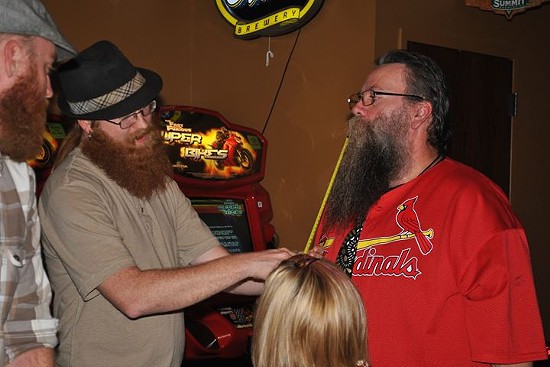 Contestants can compete in nine categories, including best mustache, partial beard, business beard, full natural beard under eight inches/over eight inches, fake beard/mustache and freestyle. Five judges -- a Covering House staffer, a former NBA player, a burlesque dancer, a hair/facial hair stylist and a beard club member -- will assign a score between 1 and 10 after examining and feeling each submission.

The heavyweight category, says Darling, is the one for the full, natural beard longer than eight inches.

"That's the one everyone gets most excited about," Darling says. Several men with "belly beards" are coming to St. Louis from all over the state to compete.

"This is where the ladies usually get involved with these giant crafted beards," made from straw, yarn and more, Darling says. "It's really a crowd pleaser."

For anyone who wants an up-close, sneak peek of this fascinating facial hair, the beard and mustache club is hosting a meet and greet at 7 p.m. Friday at Llywelyn's Pub in Webster Groves. The club usually meets once a month to "promote facial hair growth, pride, culture, acceptance, and competition in the St. Louis area," according to the group's mission statement.

"We talk about beards and mustaches. It's a commonality we all have," says Darling. "We're trying to promote this new image of the bearded man [as] less scary."

St. Louis' chapter of the beard and mustache club is almost a year old, and this is the first facial-hair competition. Kansas City held a similar competition last year.

Registration is still open for anyone who wants to compete. Signing up is $20, and watching the competition is free.