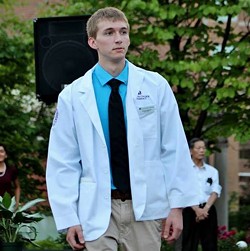 The St. Louis College of Pharmacy is offering a reward for any information on the murder of one of its twenty-year-old students, Nicholas "Kappy" Kapusniak.

The school will give $10,000 for information leading to an arrest. CrimeStoppers doubled its originally $1,000 reward offer yesterday, bringing the final tally up to $12,000.

The seemingly random drive-by shooting rocked the pharmacy school's campus, where Kapusniak was known as a happy-go-lucky music lover who played drums in a band called the Rxtions.

"It's hard, it's just really, really hard," college president John Pieper says to KSDK (Channel 5). "We have a campus of 18- to 24-year-olds, and so they are very vulnerable ages, and so it's been difficult for our students."

Kapusniak was hanging out with friends in the backyard of a house party just before 1 a.m. Saturday morning near Fox Park in south city when an unknown gunman in a car in the alley struck Kapusniak in the upper left torso, according to police.

Kapusniak's death marked the twentieth homicide in the city of St. Louis in 2014. So far, police and friends alike are at a loss to explain Kapusniak's violent end. Friends say he wasn't on drugs or involved in gangs. St. Louis Police Chief Sam Dotson says there's no evidence of a one-on-one confrontation or other provocation.

Kapusniak moved from Waukesha, Wisconsin, to study at the St. Louis College of Pharmacy, where he was set to graduate in 2017. Kapusniak had just earned his white pharmacist's coat, a symbolic rite of passage for pharmacy students halfway through their studies.