Woah, woah, woah -- before all you soft-on-crime liberals get outraged, there's more to this story.

Yes, Andrew Steven Jung, 25, was sentenced to six years for breaking into a church and stealing ice cream. The self-described "ice cream junkie" was really wasted last March and, being in St. Charles, decided a fun thing to do would be to smash a glass door to a house of Jesus and raid the fridge of its frozen dairy treats.

Police found him three blocks down the road, his face covered in ice cream. Questioned by police, Jung explained he was an "ice cream junkie."

The understandably ridiculous story made national news with the words "Ice Cream Junkie" in headlines on Huffington Post, NBC News and a website called "MoronWorld.com," which, sadly, is not around anymore. 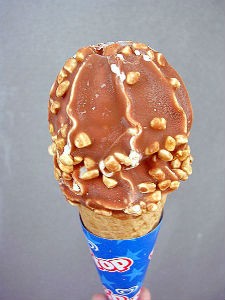 On Thursday, the Post-Dispatch reported Judge Nancy Schneider sentenced Jung to six years in prison for burglary. See also: Man Gets 4 Years for Chopping Cat to Death with Hatchet

Schneider had seen Jung in her court before -- in 2010 when he pleaded guilty to second-degree burglary. Apparently his first criminal conviction, she sentenced him to a five-year suspended sentence and didn't do any time. Instead, he got five years' probation.

Just over one year later in August 2011, Jung was caught driving drunk. Judge Elizabeth Swann sentenced him to two more years of probation.

Then in April 2012, Judge Schneider saw Jung again, this time for being accused of leaving the scene of a motor-vehicle accident. The now habitual offender didn't get any time, but was let out on a $10,000 bond.

And then came March 2013, when Jung was caught stealing dessert from God.

For Schneider, apparently, this was the last popsicle stand, so she sentenced Jung to six years in the slammer.

It's a tough sentence, but he could be out in fewer than six years. Hopefully Jung gets the treatment he needs in prison.