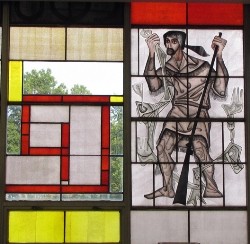 Mid-century modernist architecture sits at the crossroads in St. Louis. It is reaching the age where many of its detractors consider it obsolete, a relic not attuned to the needs of present-day society. Meanwhile, the average American sees this period of architecture with a mix of suspicion or indifference. And at the nexus sits the Lewis & Clark Library, a branch of the St. Louis County Library system. In the year since its proposed demolition, public support to preserve the library has grown throughout the region, from residents who have patronized the library for decades to modernist-architecture fans born long after its construction.

In the early 1950s, as hundreds of thousands of St. Louisans moved out of the city and into the county, the newly expanding suburbs worked to provide the services their new residents left behind in the city. While older suburbs such as Kirkwood and Webster Groves already had public libraries, much of the newly suburbanized reaches of the county north and south of the city did not. Residential development along the Lewis & Clark Highway (MO 367) proved particularly robust.

The Lewis & Clark branch opened to great fanfare. Seeking to adapt to a new era, the library rejected many of the supposed pretenses and preconceptions of libraries at the time as stuffy, moribund places. Lewis & Clark instead offered a more casual, social environment, following trends to transform libraries into civic spaces for meetings and relaxation.

The design of Lewis & Clark called for a grand open space unbroken by support columns, lit by clerestory windows and a sloping roof. The library has received two renovations in the last decade. From a structural and visual standpoint, the building remains in excellent physical condition. When I visited in the last week during the middle of the day, dozens of patrons filled the library, which makes it all the more surprising that county officials have proposed its demolition on the grounds of obsolescence and lack of functional flexibility.

I fail to see how a building with a completely open floor plan, unencumbered by structural supports or load-bearing walls, could not serve new uses in the next century. ModernSTL, a local group of architects and fans of modernist architecture in St. Louis, have proposed an architecturally sensitive and fiscally responsible addition to the library. Likewise, other north-county residents are building support for preserving the library with an online petition and Facebook page.

Continue to the next page to see ModernSTL's proposed addition. 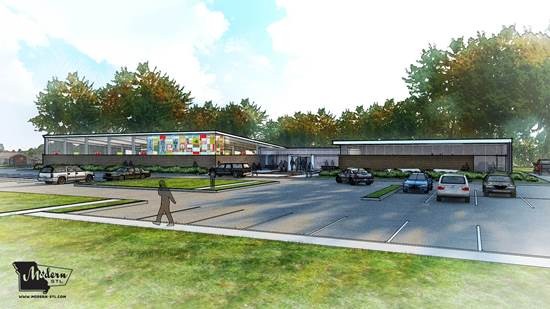 The proposal calls for a complementary addition to join the original library building to the north. If anything, the library site does not suffer from a small lot; the new wing could easily fit in the corner of the property, still providing the very generous parking lot plenty of spaces. Likewise, the relative simplicity of the original building materials could carry forward into the new addition. The group plans to present its proposal at the County Library's next board meeting on Monday, March 17, at 3:30 p.m. at library headquarters in Frontenac. Concerned residents should attend and voice their opinions about the future of the library.

I know I could lecture all day about the architectural merits of this building, and I still wouldn't convince everyone of this building's value. Many people simply do not like modernist architecture, and I know many people would still prefer to see this library demolished. But I do know what really matters to most people is how the government spends its tax dollars. It is not fiscally responsible to demolish a functional and structurally sound building merely in the name of constructing a new building for its own sake. In an age where it's often cheaper to buy a new television than to fix a broken one, saving the Lewis & Clark Library will show that at least a beloved library is not disposable.