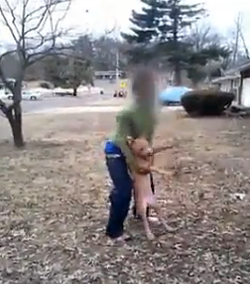 Beware: Online charlatans are looking to make a buck off your concern for Honor, the adorable dog rescued after being beaten mercilessly by a St. Louis County youth.

A video of the sickening animal abuse went viral last week. A boy flips, punches and beats the dog while a friend films and laughs from behind the camera.

The dog, now named Honor, is doing just fine. A pit-bull rescue operation called Even Chance picked the dog up Sunday to start a new life and, one day, find a new family.

"We have been told she is doing exceptionally well and loves to run and play," St. Louis Animal Control posted on Facebook.

See also: Happily Ever After: Trooper The Dog Adopted After Being Dragged By Truck Along I-55

Honor's story -- and especially the video of her abuse -- spread rapidly across social media all weekend. More than 54,000 people have already signed a petition demanding the maximum penalty for the two juveniles seen abusing the dog in the video.

People in America, Germany, Canada and all over the world have reached out to the St. Louis shelter asking how they can donate to Honor's recovery. Unfortunately, some scam artists are trying to capitalize on everyone's goodwill. St. Louis Animal Care and Control says multiple fake Facebook pages are popping up asking for donations for the dog.

"These pages are not in any way directly related to our St. Louis County Animal Care and Control shelter or Even Chance," the group posts on Facebook. "Please be advised there are no 'official' Honor pages."

Instead of donating to Facebook pages, the animal-control shelter asks that people donate directly to Even Chance if they want to financially support Honor, the staff taking care of her and the other shelter puppies in the program.

"Honor's biggest wish is [that] her shelter friends find homes," the shelter says.

And because this story is too depressing, here are some adorable photos of Honor playing with her new foster sister, Scarlet.