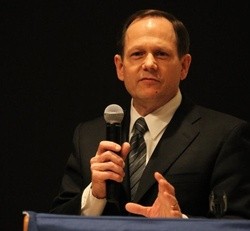 Are St. Louis City and St. Louis County ready to hug it out and become one entity to benefit the region? That was the big question at Friday's public merger discussion at the Saint Louis University School of Law.

Panels of community leaders, regional historians and policy experts spoke about the pros and cons of merging completely or partially, but civic activists primarily cared about the ideas from St. Louis Mayor Francis Slay and St. Louis County Executive Charley Dooley. We followed the discussion on Twitter through the #MergeSTL hashtag (with host @SLULAW doing the heavy lifting) and learned that while local leaders are heavily involved in the merger conversation, they've still got plenty of issues to address. Check out the symposium highlights below, or go to Storify for a much longer tweet recap.

Slay opened the day-long symposium with a plea for cooperation and a reminder that leaders still are figuring out the best way to approach a merger:

Mayor Slay: We are part of the same regional economy. What goes on in the county impacts the city and visa versa. #MergeSTL

Dooley also emphasized working together, saying that the entire region's health depends on efficiency and communication:

"What were saying is we don't have the answers... Let's have a dialogue." @CharlieADooley pic.twitter.com/OXGn931EkU

Executive Dooley: The City of St. Louis is our front door. The Arch is not in Clayton. #MergeSTL

"As leaders of this community, we have an obligation to do better... We don't have the answers. Let's have a dialogue." #MergeSTL

Continue for thoughts from a former senator who successfully merged city and county governments.

Lugar met with every member of the legislature in Indiana. "They were not all appreciative of what we wanted to do." #MergeSTL

The similarities between Indianapolis at time of UniGov and #STL now are striking. Gives me hope we can accomplish change here. #mergeSTL

The afternoon panels mostly focused on the national, state and local history that led to the City/County split, how siloed municipalities contribute to the decline of communities and how a merger may affect crime:

Fragmentation is a structural impediment to community formation. If you can't invest, you will decline. James Buford #mergestl

Constitutional law professor Steven Steinglass: 'Missouri has one of the easiest constitutions in the country to change.' #MergeSTL

Continue for the best St. Louis crime video ever, plus special "merging" options.

Dotson: Why do we label crime as a St. Louis problem and not a regional problem? #MergeSTL

Dotson finished the police presentation with this lighthearted but informative video: https://t.co/EDnYimGI3Z #MergeSTL

But our favorite historical tidbit? St. Louis legalized prostitution for a while in the 1870s:

Anders Walker: 'The politics today are significantly less corrupt. I don't know of any political party based in a whorehouse.' #MergeSTL

Reviving legalized prostitution could encourage "merging" in more ways than one. Let's get on it, governments.