Remember those rumors that the United States national soccer team would take on Bosnia-Herzegovina this month in St. Louis?

Well, the rumor was kind of right. The Bosnian national team, including St. Louis native Vedad Ibisevic, will play a big international friendly at the Edward Jones Dome May 30 against the Ivory Coast.

The game should be an exciting preview of the Bosnian team, a major contender in this summer's 2014 FIFA World Cup in Brazil. It's Bosnia's first ever World Cup appearance, and their lucky draw into an easy opening bracket should set them up to advance far into the worldwide tournament. 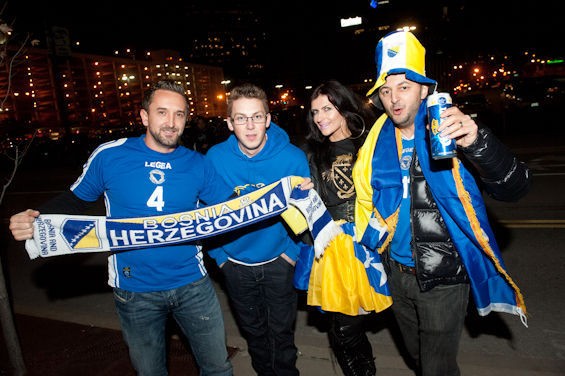 Hosting Bosnia is a special opportunity for St. Louis -- one of only two cities without a Major League Soccer team to get a special pre-World Cup exhibition game -- to make more waves in the soccer world. St. Louis is home to the largest Bosnian population outside of Bosnia, and the last time the national team came to town, die-hard fans in blue and gold packed Busch Stadium to cheer them on.

That's the kind of momentum St. Louis needs if soccer lovers want to bring a Major League Soccer team -- or even a United Soccer League professional team -- to Gateway City.

The U.S. men's team originally planned their own game in Ukraine, but after violent protesters ousted the president and Russia retaliated by capturing an entire peninsula, organizers moved the game to Cyprus.

Tickets go on sale March 17 on the MLS Soccer website. St. Louis Rams season-ticket members will have access to a special presale. Organizers have not announced a kick-off time.

This is St. Louis' fourth soccer exhibition in the last year, and the second at the dome. Friendlies between Chelsea F.C. and Manchester City F.C., Inter Milan F.C. and Real Madrid F.C., and Bosnia-Herzegovina and Argentina last year sold nearly 150,000 tickets.