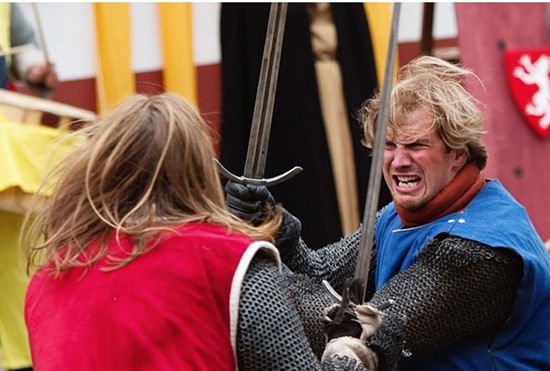 It was a long time coming.

At a kindergarten school performance Tuesday night in Cape Girardeau, Kevin Alexander saw fellow Cape Girardeau dad Ryan Steck yank his stepdaughter out of his hand. He didn't appreciate that too much, so he said so.

After a few nasty words were exchanged -- and the children surrounding the two dads likely wondering if they should join in a chorus of "Ooooohhhhhh!" -- Steck allegedly backhanded Alexander and spit on his face, according to the Southeast Missourian.

That's when Alexander did what he had wanted to do for quite some time: punch Steck in the head, knock him to the ground, and punch him a few more times.

An off-duty cop was on the scene of the drama at the drama, and he called for back-up. The fight was eventually broken up and nobody was seriously injured.

After the smoke cleared, Steck defended his good name, saying he never smacked Alexander upside the head nor hocked a loogie on his face.

"I'm not the type of person who would get into a fight at a school like that," Steck told the Cape Girardeau paper.

The two men say they had a history.

According to the school website, the performance was a musical.