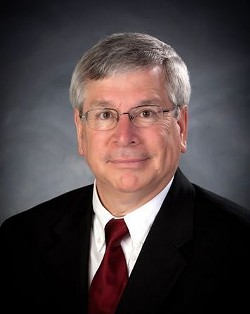 A Republican state senator introduced a bill this week that could allow Missouri business owners to refuse service to customers if "substantially motivated by religious belief."

The bill was introduced Monday by Republican Wayne Wallingford. In 2013, the two-term Senator from Cape Girardeau joined Democratic lawmakers in an attempt to prohibit workplace discrimination based on gender and sexual identity.

Wallingford's bill, Senate Bill 916, states that a governmental authority shall not substantially burden a person's free exercise of religion unless it demonstrates a compelling governmental interest. For example, the bill could grant a restaurant owner the right to use his religious belief as legal justification for refusing to serve a same-sex couple.

Progress Missouri director Sean Soendker Nicholson sees this bill as an overstep in the wrong direction.

"We have a First Amendment, it does a great job of protecting our religious liberties," he says. "What we don't have are protections for LGBT people in the workplace. That's the kind of law we need to pass."

Nicholson is correct on both counts. 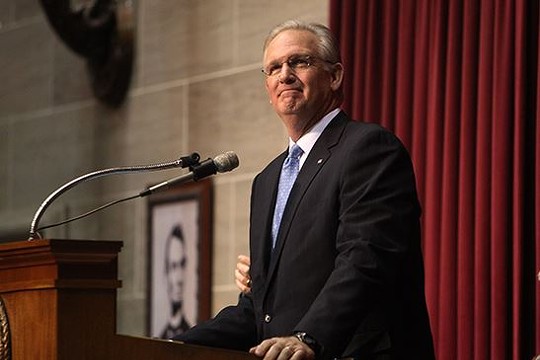 Indeed, Missouri's Human Rights Act does not currently recognize discrimination based on sexual orientation or gender identity. With Wallingford's support in 2013, the Missouri Senate passed a measure banning such discrimination, but the House never brought the measure up for a vote. (More recently, Missouri Governor Jay Nixon used his State of the State address to call for an end to LGBT discrimination in the workplace.)

But it's Nicholson's initial point, about the First Amendment, that makes religious freedom bills like SB 916 so problematic for Washington University law professor Gregory Magarian.

"Usually courts are very skittish about making pronouncements about religious liberty," says Magarian. "A lot of time they say, look, what the religious person says is a sincere religious belief, and we'll take their word for it."

The First Amendment of the U.S. Constitution already protects free expression of religion and blocks the government from favoring a particular faith. (Of course, there are limits to the First Amendment's protection.)

"We're talking about religious liberty...but underneath it all, this is still an effort by states to license discrimination," Magarian says.

Though the SB 916 does not explicitly mention sexual orientation, Wallingford told The Kansas City Star that his bill is designed to protect businesses like Hobby Lobby, a Christian-owned retail chain that's fighting the Affordable Care Act's mandated contraception coverage on religious grounds.

Magarian says the Hobby Lobby lawsuit inspired this new wave of religious freedom legislation. In Arizona, a bill similar to SB 916 is awaiting approval or veto from governor Jan Brewer; In Kansas, legislation allowing businesses to discriminate against same-sex couples passed the House but was defeated in the Senate.

In the end, what may sink Wallingford's bill -- and all those like it -- is that it would establish religious protection on the backs of a particular class of people.

"The wrinkle here is that the law is based on a particular kind of legislative animus, against same sex couples. That's a problem," says Magarian. "If I were the Supreme Court or the legal authority in charge of figuring this out, I would strike it down."

Daily RFT has reached out to Wallingford for comment. We'll update if we hear back.

Updated 11:40 a.m.: Sex-positive coffee shop Shameless Grounds added this poster to its Facebook page this morning. (Alas, it seems Wallingford will have to find a different establishment if he wants his morning coffee served with a vintage Playboy.)