Chances are good that, at some point, Harold Ramis cracked you up.

Ramis died yesterday of complications from an autoimmune disease.

But despite his associations to Chicago and Second City, Ramis' ties to St. Louis also helped inspire some of his best, most gut-bustingly hilarious films.

For instance: The stick-it-to-the-dean antics in Animal House (which Ramis co-wrote) were partly inspired by his college days in Washington University in the Zeta Beta Tau fraternity.

It was Ramis who wrote the character Bluto for John Belushi -- meaning he takes a large share of credit for the most spectacular food-fight to ever grace the silver screen.

Though it seems almost obvious in retrospect, Ramis revealed to the Post-Dispatch in 2005 that the R&B club featured in Animal House was based on an actual club he and his college buddies patronized in East St. Louis, Leo's Blue Note.

After graduating in 1966, Ramis spent another seven months in St. Louis while working at a mental hospital. In an interview for the 2009 book And Here's The Kicker, he recalled that the experience "prepared me well for when I went out to Hollywood to work with actors." 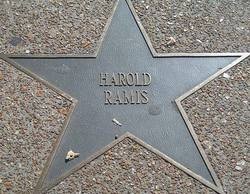 "People laugh when I say that," Ramis continued, "but it was actually very good training. And not just with actors; it was good training for just living in the world. It's knowing how to deal with people who might be reacting in a way that's connected to anxiety or grief or fear or rage. As a director, you're dealing with that constantly with actors."

See also: Comedian and Missouri native David Koechner is still known only as "that guy." Will Anchorman 2 change that?

Ramis went on to become a comedy force of nature in Chicago, writing jokes for Playboy and joining the pioneering improvisational comedy group Second City, where also met Belushi and Bill Murray.

Ramis managed to insert St. Louis into another of his later comedies, National Lampoon's Vacation. Many remember that particular scene -- where Chevy Chase takes his family on an ill-advised detour through crime-ridden St. Louis -- for its hilarious (but bluntly stereotyped) parody of urban crime.

In a 2004 interview with Riverfront Times, Ramis said that he regretted making the scene, in which a group of black gang members terrify Chevy Chase's fictional family and strip down their station wagon for parts.

"I apologize for the whole scene," said Ramis at the time. "I wouldn't think of doing a thing like that now. It was supposed to be about prejudice, when in fact it was prejudiced."

In the end, Ramis will be remembered for his stunning run of comedies in the late '70s and '80s and for his collaborations with Bill Murray. (For what it's worth, we think Ramis' directorial masterpiece, Groundhog Day, should be required viewing for the human race.)

We'll leave you with one of our favorite Ramis moments, as Dr. Egon Spengler in Ghostbusters.