Remember that story about Scott Davis, that guy who was was tripping so hard, he got butt-naked, beat-up people -- including a cop -- and got 25 years in prison? Well, a man in a "cowardly lion" suit stood in front of the state capitol on Saturday to protest alleged police corruption in the O'Fallon Police Department that Davis' family says caused the long sentence.

"Governor Nixon awarded the medal of valor to an O'Fallon police officer based on lies," the man said in a video sent to Daily RFT.

The "lies" the man was referring to is based on the 2012 incident that saw then 23-year-old Davis get ridiculously high on LSD and brutally attacked his friend, Catherine Naber. The initial attack is not up for dispute. However, Scott's family -- and Naber herself -- have been arguing for months that the police officer called to the scene lied about saving Naber once he got there, something for which he was awarded a Medal of Valor by the governor.

In case you're not aware of the story, here's some background: Back in April 2012, Davis was recuperating after having spent a few weeks in a mental hospital for doing so much LSD in one trip that doctors said he was under a "permanent drug-induced psychosis," his mother, Gail Daniels, tells Daily RFT. But then Scott did the worst possible thing one can do after having gone on a perma-trip: He took more LSD.

Naturally, once the chemicals had their effect on Davis' already ravaged mind, he thought evil spirits were running around the house and his longtime friend Naber had murdered his cousin and was conspiring to kill him, too. So he proceeded to beat her with an imitation "medieval-style club."

She escaped the house and locked herself up in her car, where she called 911. It's at this point where the stories differ.

For more on this story about what not to do on LSD, click on the next page...

Officer Thomas Kenyon said during the 2013 trial that he saw Davis butt-naked and hanging outside Naber's car, beating her. To save the woman's life, he "confronted" Davis and, according to the police, Davis attacked him. Kenyon used his taser, but it didn't work on the LSD-fueled madman and instead, a few plugs hit the officer. Davis and Kenyon ended up in a fight and "in fear for his life," Kenyon shot Davis in the shoulder. 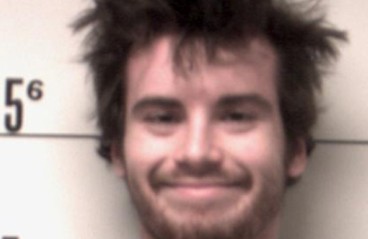 Davis was sentenced to 25 years in prison last November for the incident. He got 10 years for assaulting Naber and 15 years for attacking Kenyon. And Kenyon was awarded the medal of valor for saving Naber's life and fighting off an LSD-fueled madman.

See also: Scott Davis Gets 25 Years in Jail for Biting Cop in Face While Naked, Tripping Balls in O'Fallon

Naber has said that Davis was not beating her in the car. She says the doors were locked and windows were up. And as we previously reported, she has not appreciated being made into a helpless victim who was rescued by others. She saved herself, she says.

Davis' family is going one step further, saying that Kenyon and the O'Fallon Police Department exaggerated the details about the police officer assault to cover up a botched attempt to apprehend him and lack of training in dealing with drugged individuals the night of that very bad trip.

In addition to the cowardly lion protest, they plan on doing a reenactment of the incident to prove their case.

"The reenactment will prove there is no way possible the officer shot when and how he stated," Gail Daniels says, "which reinforces our claim that the O'Fallon Police department did not conduct a required internal affairs investigation on the shooting."

O'Fallon Police Chief Roy Joachimstaler told us in November that he stands by his officer's actions that night, as well as his department's review of the shooting.

"It's unfortunate they feel that way, but come on - did you see the photos?" Joachimstaler said, referring to the photographs of Naber's injuries after having been assaulted by Davis.

The photos were indeed quite brutal. But Davis got more time for assaulting Kenyon than he did Naber, and that's what she and Davis' family are protesting, since they say it didn't happen the way the cops said it did - and they claim to have proof.

Only time will tell if this bad trip story gets trippier.