Mike Hopkins, Astronaut from Missouri, Shares Photos of the Show-Me State from Space 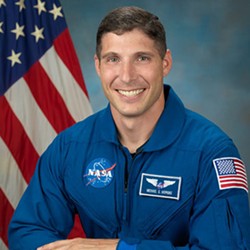 The International Space Station took Hopkins and his "roommates" -- Russian cosmonauts Oleg Kotov and Servey Ryazanskiy -- past Hopkins' childhood home in Richland, Missouri, and past his high school in Osage Beach, Missouri, earlier this month.

Hopkins snapped a photo and shared it on Twitter:

In the middle of this pic is a little farm outside of Richland, Missouri where I grew up. Looks different from here! pic.twitter.com/cEKhM8uM6q

The station also orbited over Hopkins' high school alma mater, School of the Osage in the Lake of the Ozarks.

Lake of the Ozarks in Missouri. Big shout out to my high school, School of the Osage (near the middle of pic) pic.twitter.com/TbPJVYCVFA

Hopkins frequently posts his amazing views of Earth from space on Twitter. In November, his orbit took him over St. Louis, where he shared this photo of River City:

Hopkins was born in Lebanon, Missouri, and grew up on a farm about 150 miles southwest of St. Louis. His parents still live in Warrensburg and Camdenton. Hopkins graduated with his bachelor's degree from the University of Illinois in 1991.

He is scheduled to return to Earth in March 2014.