We think the Winter Olympics are great. That overtime shootout when Blues forward T.J. Oshie scored a crazy between-the-knees goal to win it all for team U.S.A.? Wow. Just, wow. Instant classic.

Alas, other "sports" at the Winter Olympics are decidedly less exciting. (We're looking at you, curling, ice dancing, luge, biathlon and bobsleigh.)

If the International Olympic Committee really wants to ensure sports greatness for the 2018 winter games in Pyeongchang, South Korea, they should tap the same source that provided Sochi with Oshie -- St. Louis, that is.

Our biggest gripe with Winter Olympic sports like skeleton -- where the winner is determined by orderly, individual speed runs -- is that they lack tension.

The grand St. Louis tradition of sledding down Art Hill in Forest Park, however, would present a fantastic spectacle of chaos and excitement for an Olympic crowd. Just imagine: Athletes in skin-tight bodysuits hurtling down the packed hill, swerving desperately to avoid snowboarders and oncoming children -- wouldn't that be fantastic?

Style points awarded for ditching your modern sled for a folding chair -- that's what a handful of state-fair employees first used to slide down Art Hill in 1905.

See also: The 10 Dumbest "Sports" of the Summer Olympics

It's surprising just how boring the winter biathlon is to watch. Yes, it has guns, but the pace is plodding and slow.

A St. Louis biathalon would start with a bracing, polar plunge into Lake St. Louis. After finishing their laps, competitors would then locate the nearest fast-food joint and attempt five perfect Nerf gun assaults on the drive-through.

This event would stay faithful to its St. Louis roots, but with one Olympic twist: Teams would still build elaborately themed, ramshackle racing carts -- but the finish line would lie on the other end of an unplowed residential street covered in black ice.

Style points awarded for competing naked, a la the World Naked Bike Ride. (We'd like to think Vladimir Putin would enjoy the naked Winter Idiotarod. We know he's a fan of partial nudity.) 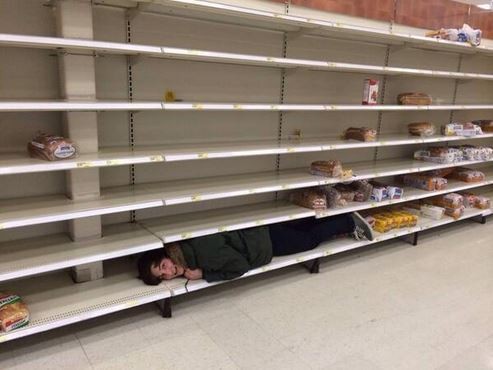 Competitors are forced to endure 36-hours of hyperbolic local weather coverage before they are unleashed into a local Schnucks. Medals awarded for most bread and milk hoarded.

Style points awarded for throat-punching fellow shoppers for over a bag of whole-grain hamburger buns.

Put Olympic athletes in American-made SUVs and let them compete in a true winter challenge: Competitors must speed up just as they turn onto any unplowed side street in south city, then stand on their brakes. The winner's determined by distance, although style points will be given for total number of side mirrors claimed.